Lori Harvey, 24, definitely turned heads in this super sexy outfit. The model and influencer sported a nude print catsuit outfit by British designer of the moment Charlotte Knowles (now going by brand KNWLS) as she stepped into seafood restaurant Catch in West Hollywood on Friday, Sept. 17. She opted for a nude and chocolate brown print outfit by the label, which they dubbed “check skin,” along with a beaded underwear style bodice overtop. Her top featured a cross-cross detail mimicking a sarong, and allowing her toned tummy to peek through. 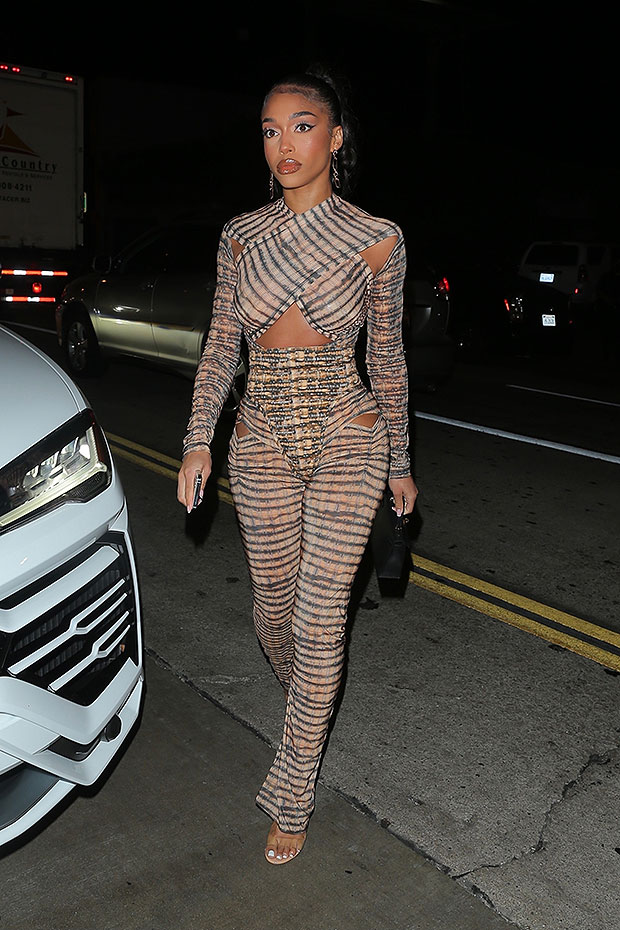 She accessorized with a small Hermès Kelly clutch bag in black with gold hardware in her left hand, hanging onto her iPhone with the right. Steve Harvey‘s stepdaughter kept her glam on point too, going with her usual brown-toned and bronzed makeup. Her skin looked illuminated under the camera flashes, which also caught a glimpse at her sleek cat liner, golden eye shadow, and ultra-glossy dark nude lip gloss. She opted to keep her hair in a high curled ponytail, allowing her drop silver chain-link earrings to dazzle.

Lori has been hitting some major career milestones as of late, which included some appearances at New York Fashion Week. The model slayed in a long brown gown with gunmetal chain details as she attended Revolve’s party with Dundas on Sept. 11, as well as the Revolve Gallery party where she cozied up to Adrienne Bailon and Megan Fox! For another night out, Lori slayed in a all green-leather outfit from Italian luxury label Bottega Veneta.

In recent months, the 24-year-old appears to be happier than ever dating Michael B. Jordan, 34! The couple have kept a low profile in recent weeks, but weren’t shy about packing on the PDA while out on a lunch date in August. Lori and Michael sweetly held hands as they approached the exclusive Nobu restaurant in Malibu, co-owned by Robert De Niro, for their world-famous sushi and sashimi. We hope to see more of these two love birds soon!

Household bills will soar by more than £1,500 a year