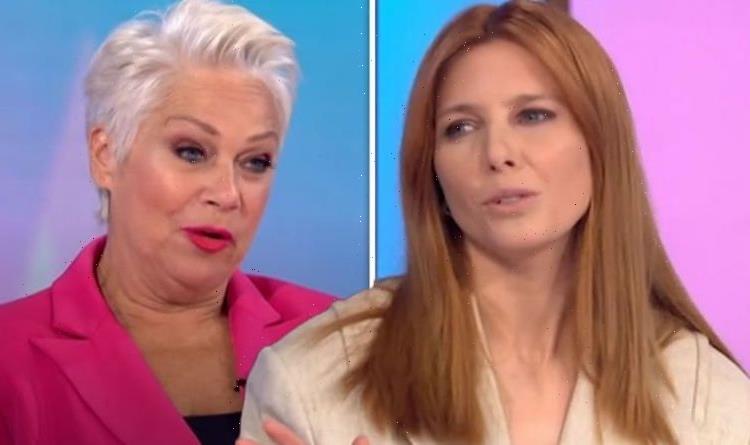 Stacey Dooley, 34, joined the Loose Women panel for a candid discussion on ITV where she talked about her new book as well as her most recent self-titled documentary Back On The Psych Ward which aired its first episode on Monday. Denise Welch, 63, hit back at a viewer on Twitter after being branded “rude”.

Denise was alleged of turning her back on show host and colleague Charlene White during the interview.

Twitter user, Summer Sherberry, penned: “Did anyone notice how Denise turned her back on Charlene when talking to Stacey Dooley?

“I thought it was such rude body language #LooseWomen.”

Denise retweeted the message in view of her 515,000 followers.

She fired back: “Please explain to me how I could talk to Stacey without turning my back on Charlene?”

The ITV panel member’s fans rushed to comment on the post as they inundated the presenter with support.

Paula Rooke commented: “Denise couldn’t be any further from rude! Very down to earth and be a trooper for most of us through this s**t especially when some of us have lost someone close. So thank you @RealDeniseWelch you’ve kept me going.”

Caz Murphy added: “Some people would stoke a row in an empty room… and then go on Twitter to seek like-minded people, best leave them to it, no point in looking for a reason with the unreasonable.”

During the programme, Charlene had gushed over her co-star as the pair giggled together on-air.

The Loose Women host commented: “It’s always a laugh when I’m on with Denise.”

As Charlene welcomed Stacey onto the programme, Denise could be seen facing their show guest as she listened intently to the BBC presenter.

The former Strictly contestant also opened up about her relationship with her beau Kevin Clifton.

As she chatted to the panellists, Stacey admitted how much she had missed dancing since her Strictly triumph.

She gushed about her boyfriend and explained that he had bought her a pair of Latin dance shoes and that they were planning to have a trip to Blackpool to dance together again.

Fans were delighted that Stacey appeared on the show and spoke to the Loose Women.