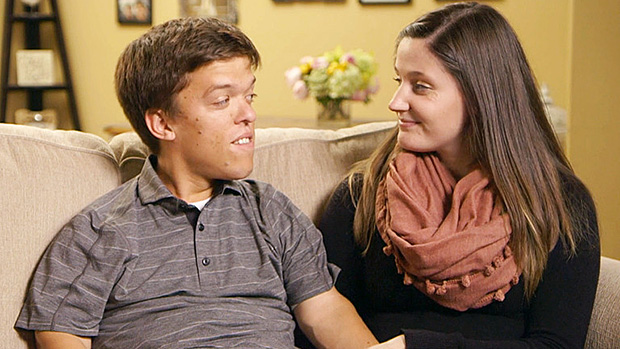 ‘Little People, Big World’ stars Zach and Tori Roloff took to Instagram on May 13 to share some adorable pics that helped them announce the exciting news that they’re expecting their second child.

Little People, Big World‘s Zach Roloff, 29, and his wife, Tori Roloff, 28, are expecting another baby and they shared the happy news in the cutest way! The married couple, who already have two-year-old son Jackson, posed in various pics with their adorable tot to reveal the news that they’re having a daughter in Nov. In one snapshot, Jackson can be seen sitting outside in a field while wearing a black and white baseball T-shirt that has “big brother.” written on it. He’s holding one big blue balloon and one big pink balloon as his smiling parents standing and holding hands behind him. In another, he’s holding his hands up high in celebration, and in a third, the trio is showing off a sonogram pic of the soon-to-be new baby.

“Zachary and I are so excited to announce that Jackson is going to be a big brother! We are expecting a sweet baby girl this November! 🎀 Thank you so much for always supporting our family and loving us! #zandtpartyoffour#babyroloff #babyjroloff#moniqueserraphotography 📷: @moniqueserraphotography,” Tori captioned the sweet photos.

Zach and Tori’s thrilling baby news comes a year after they were seen talking about having another baby on an episode of Little People, Big World. In the episode, Zach gushed about being a dad to Jackson and how he love to expand his brood in the future. “It’s a ton of work taking care of a child, but it’s very rewarding,” he said. “Being a dad’s been great. Jackson’s the cutest little thing. I would love to have, like, a little pack. I definitely want to have more kids.”

We’re so excited for Zach, Tori and little Jackson and can’t wait to see their family of three expand to a family of four!