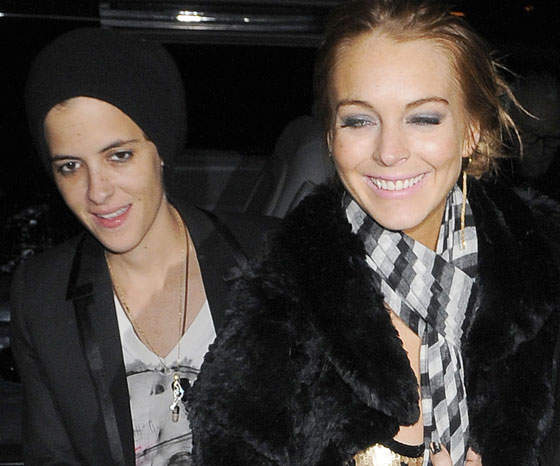 Back in the day when Lindsay Lohan was the go-to mess for the blogs (not that she’s no longer the go-to mess), she attempted every trick in the book to shock and stun. For instance, the night she party crashed Paris Hilton and Britney Spears’ night of fun (though she claims she didn’t but she was probably high and doesn’t remember) and that messy relationship with DJ Samantha Ronson where Sam looked like she was over it 100% of the time. I think I know why she was so upset now. Lindsay claims she and Sam were just friends and nothing more. So yeah, I’d be pissed too if I was spending as much time as she was with that tramp and only getting it once a week.

Lindsay is still making her rounds as she tries to get people to care about her new MTV reality show Lindsay Lohan’s Beach Club. People reports that on Wednesday she sat down with Howard Stern on his SiriusXM show to discuss her past relationships and when the subject of Sam came up Lindsay immediately wanted to set the record straight that even though she and Sam enjoyed some licky-licky good times at the base they were more friends than anything else.

“I talk about that on the show,” she told Stern about previously dating Ronson. “We’re friends.”

“We were more friends than anything,” Lohan said about the English DJ.

Although the pair stopped being friends in the past, Lohan confirmed that they are now on good terms and clarified, “We were always more like best friends as well.”

Lindsay mentions their past relationship, which ended back in 2009, because of comments people have made about one of the male VIP hosts at her club who’s bisexual. And since Lindsay’s single now, Howard asked her if marriage was on the horizon. She made it clear that the MAN who rubs up on her 100 proof titties in the future needs to be someone who, unlike her, does not want to constantly be in the limelight.

“I think it will happen when it’s meant to happen,” she said.

As for what she’s presently looking for in a romantic relationship?

“I want to date a guy that’s a businessman — doesn’t have Instagram, doesn’t have social media,” she said, “and is completely off the grid in terms of that kind of stuff.”

Good Luck with that Lindsay. You finding a man who doesn’t want to capitalize on your drama and fame would be like Paris calling you and saying “Girl, you wanna hang out again?” That shit ain’t happening darlin’.

You can check Lindsay, and her elderly teacher who smokes a pack a day voice out on Howard’s show below.

RICHARD LITTLEJOHN: Sorry folks, but I have to mention the B-word