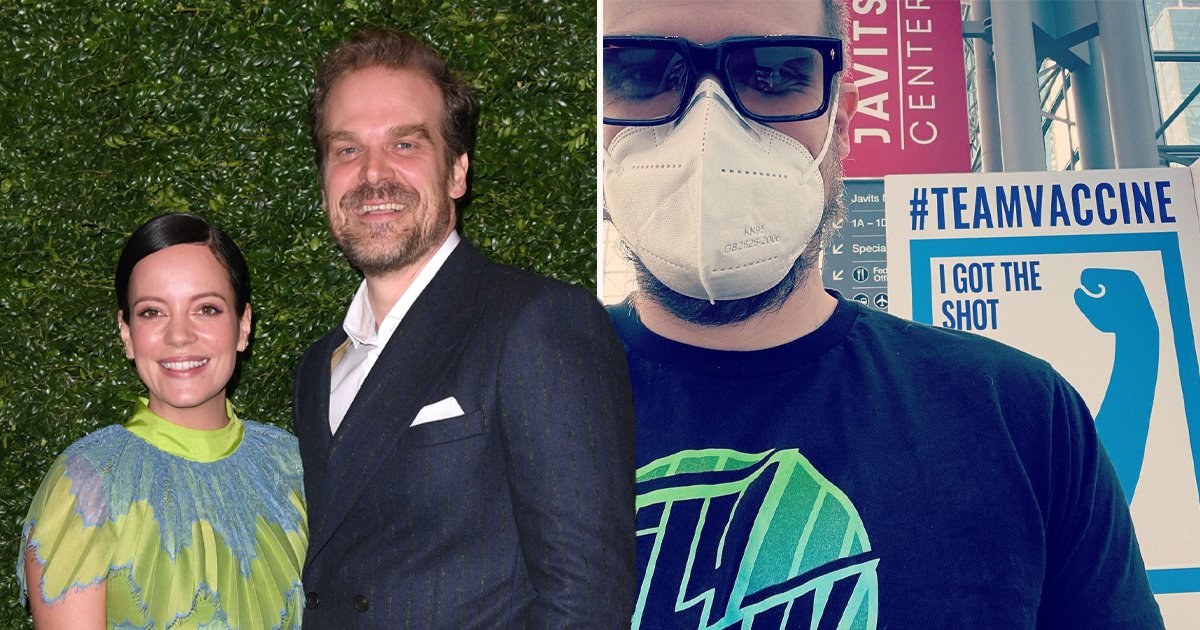 David Harbour has revealed he has had his coronavirus vaccine after his doctor told him he was eligible to receive it.

The Stranger Things actor, 45, shared a photo of him wearing a mask and sunglasses in front of a poster outside the Javits Center in New York which read: ‘#TeamVaccine I got the shot’.

He told his followers: ‘Protect the ones you love. My doc told me I qualified (fortunately?) cause of c**p I don’t need to get into. You may too.

‘And if you click those state and city websites over and over there are appointments available. Do it and let’s get back into those too tightly seated New York theaters and have actors spit all over premium seat priced patrons.’

David joked: ‘The internet tells me I will grow calf hooves from my torso, but that may take a few days, I’ll keep you posted.’

Eagle-eyed fans also spotted that David was wearing one of his wife, Lily Allen’s merch T-shirts for his trip to the vaccination centre.

The Smile singer’s name was just visible in the corner of the shot, proving her husband is also her biggest fan too.

Until recently, David has been in the UK with Lily and her daughters, Ethel and Marnie, and was recently spotted walking around Notting Hill.

The couple had been isolating together as a family amid the coronavirus pandemic, with Lily often sharing sweet photos and videos of David bonding with her children.

Lily and David have been an item since 2019, tying the knot in Las Vegas last year with their wedding officiated by an Elvis Presley impersonator.

While the pair had intended to keep their big day under the radar, the news broke after the state of Nevada tweeted that the couple had been to Vegas to exchange their vows.