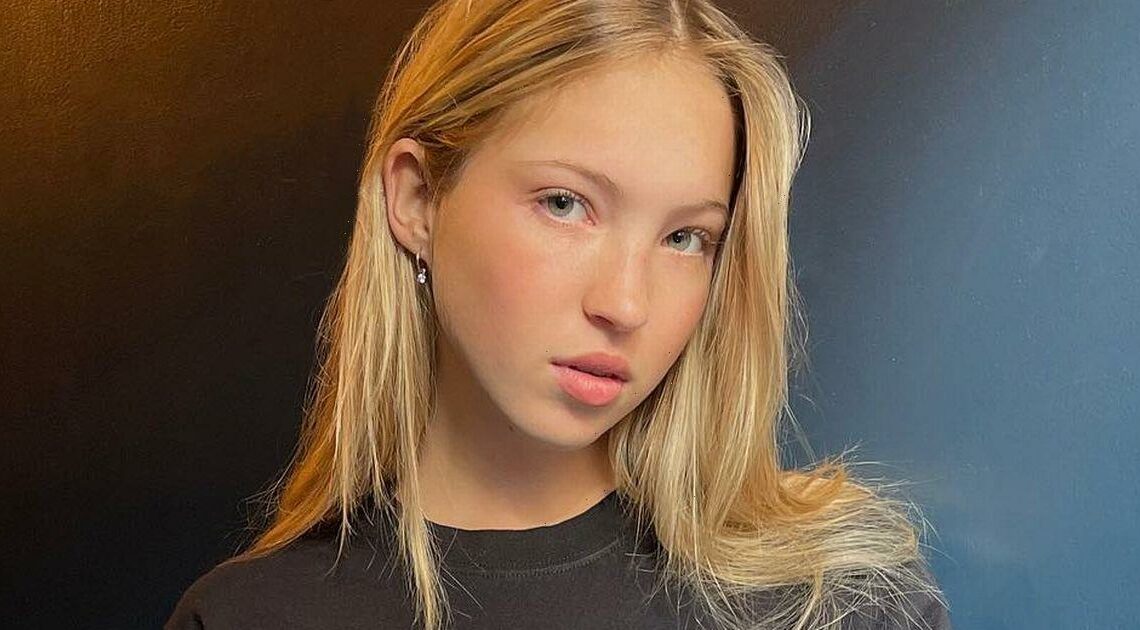 Lila Moss looked the spitting image of her supermodel mother Kate Moss as she made her cover debut for British Vogue.

The 19 year old model of the moment is the daughter of the iconic 48 year old catwalk queen and Dazed Media co-founder Jefferson Hack, who both dated in the early 2000s.

And with her mother having graced the cover of the fashion bible worldwide a mammoth 48 times, it's clear that Lila would follow in her footsteps, as is evident in the snaps taken by photographer Steven Meisel.

Lila makes quite the statement for her racy new spread for British Vogue, as she dons a translucent resin top from the British heritage brand Loewe for one snap and wears a feminine baby blue floral headband for the cover.

Lila sports bold red, purple and silver eyeshadow and nude lipstick for the cover image as she gazes at the camera while clad in a pink top.

Her racy look is teamed with a blue satin cut-out halterneck top and matching headband in her other snap, complementing her extensive silver eyeshadow.

Lila's images are taken by photographer to the stars Steven, who has regularly collaborated with her mother, Kate.

Speaking in the wide-ranging interview with Vogue, Lila admitted that her first steps as a model were taken cautiously.

"My mum always put me off [modelling]. She was always like, 'If you wanna do it, you can, but I wouldn't recommend it'," she said.

Speaking of her younger years, Lila explained that at age eight, she began to process her mother's fame.

Lila said: "That was when I realised the paparazzi thing, that they were interested in her, for some reason.

"Then I went to secondary school, and everyone was like, 'Oh, your mum's Kate Moss!' You don't really have a filter when you're that young, and I was like, 'How do you know who she is? She's old! She's old and boring!'"

Lila, who bagged her first modelling gig at 15, added that she and her mother are close and often raid each other's wardrobes.

"In the last three or four years, I've realised that her style is actually really cool. I'm having to admit it now," she confessed.

"She doesn't have a good trackies selection. She only has pyjamas. She probably would hate me saying that. She doesn't want anyone to know she wears trackies."

Read the full feature in the May issue of British Vogue available via digital download and on newsstands from Tuesday 26th April.

For all the latest showbiz stories, sign up for OK! 's daily newsletter here.