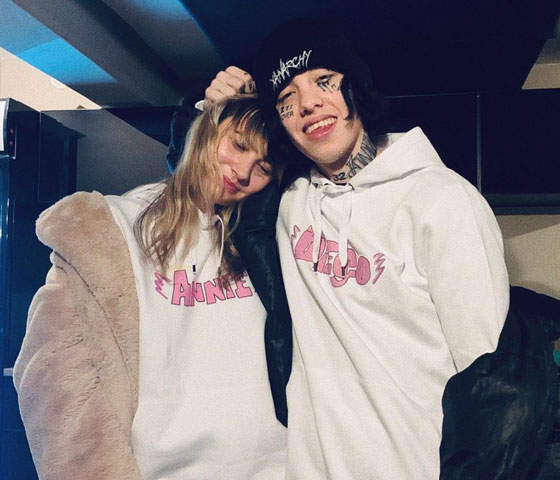 Lil Xan’s fianceé Annie Smith says she got pregnant with a Lil Xanby, and because her ultrasound picture was one snatched from Google, some speculated her pregnancy was faked. Then she said she had a miscarriage. Lil Xan is forever a gentleman so he wants everyone to know that if there was a fake pregnancy he had nothing to do with it. I means it’s a weird flex but sure Lil Xan, sure.

According to Us Weekly

“I did not fake a pregnancy,” the 22-year-old rapper said during his Tuesday, April 23, interview with No Jumper. “I saw two pregnancy tests with the line that said, ‘You’re pregnant,’ and I was like, ‘OK, so she’s definitely pregnant.’ But I didn’t watch her pee.”Xan explained that he researched whether pregnancy tests can be faked and found out the process is “pretty easy.” He went on to admit that he is “50/50” on if he believes Smith, 21.

Lil Xan explained that his relationship with Smith is “in limbo,” even though he still loves her. While he admitted that the social media star let him cheat on her with other women during their romance, he hoped having a child would “calm me down from fucking bitches … and living a crazy lifestyle.”

Lil Xan lost me at “researched” because research usually involves reading and having an attention span greater than that of a gnat on meth, and well Lil Xan is Lil Xan. But really, he also says that he’s allowed to “fuck other bitches,” and when you add that to the fact that he’s suspect of his fiancee faking her pregnancy, it’s obvious that they have redefined the meaning of everlasting love. Webster’s should update the definition of everlasting to read: Lil Xan and Annie Smith’s love.

Annie has spoken out about her take on her relationship with lil Xan.

The content creator penned a heartfelt message about her relationship via Instagram Stories on Wednesday, April 24. “All i can say is love is hard. True, passionate, unconditional, eternal love will never be easy ever. Love sucks and it is the most beautiful, magical feeling in this world,” she wrote. “Judging people via the internet about who they fall in love with and what they choose to do in their relationship is so sad because you can NEVER understand another couples [sic] relationship.”

Annie ain’t wrong. I will NEVER understand this mess. But maybe this is just me not understanding modern day romance. Maybe having a face without tattoos and believing when someone tells you they had a miscarriage is a thing of yesteryear and these two messes are what the future has in store for us.

Brie Larson and Scarlett Johansson: Which Marvel Actress Do Fans Like More?

Alex Jones: The One Show host’s replacement reveals what it’s REALLY like filling in
World News