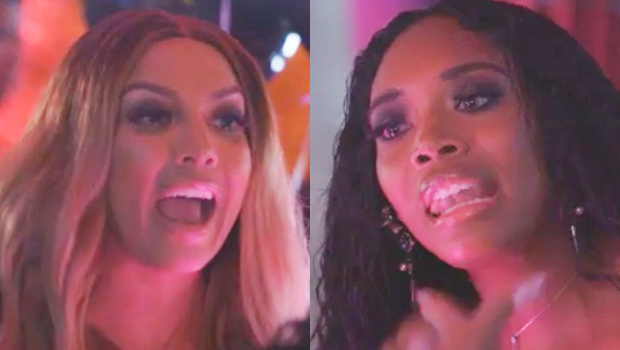 Yikes! Jonathan was hoping Kimbella and Yandy would squash their beef, but they did the opposite when they duked it out at his birthday party during the Dec. 3 episode of ‘L&HH:NY’.

It had been months since Kimbella and Yandy talked before Jonathan proposed they squash their beef during the Dec. 3 episode of Love & Hip Hop: New York. So we weren’t surprised when Kimbella said she had very little interest in extending an olive branch to Yandy. During a day out in NYC, Jonathan suggested the idea to Kimbella after he said, “I know you have mad issues going on with Yandy.” Apparently, they were fighting a few years ago after Yandy invited her to a birthday party, but her appearance caused a ton of drama, and after the fact, Yandy said she never invited Kimbella. Then, Yandy ghosted Kimbella for a number of months before wishing Kimbella a happy birthday on Instagram. That bothered Kimbella, as she felt Yandy was just doing it for likes on Instagram, so she called Yandy up and officially ended their friendship.

Unfortunately for Kimbella, Jonathan still invited Yandy to his birthday party. And she walked into the bash after Kimbella had already been arguing with both Jonathan and Juju over another matter, so when Yandy walked in, Kimbella was already fired up. And knowing they had some beef to potentially squash, Jonathan and Juju walked away and let Kimbella and Yandy go at it with each other.

“It’s unfortunate — everything that went down. Going back to the whole thing with me pulling up [to the party] and the baby mama situation, I pulled up for you. It wasn’t a problem until you sat up there and let me look crazy. And I had to take the fall for that!” Kimbella told Yandy, who was shocked to find out that’s why Kimbella ended their friendship. “That’s what you’re mad about? A kid’s party that you CHOSE to pull up to?” Yandy asked before she suggested that Kimbella put this “nonsense aside” so they could go back to being friends again. But Kimbella didn’t seem interested. In fact, she told Yandy that her “s*** stink” and everyone knows it.

Not a whole lot more was said before Kimbella stormed off and seemingly left the party. So much for them squashing their beef, right?