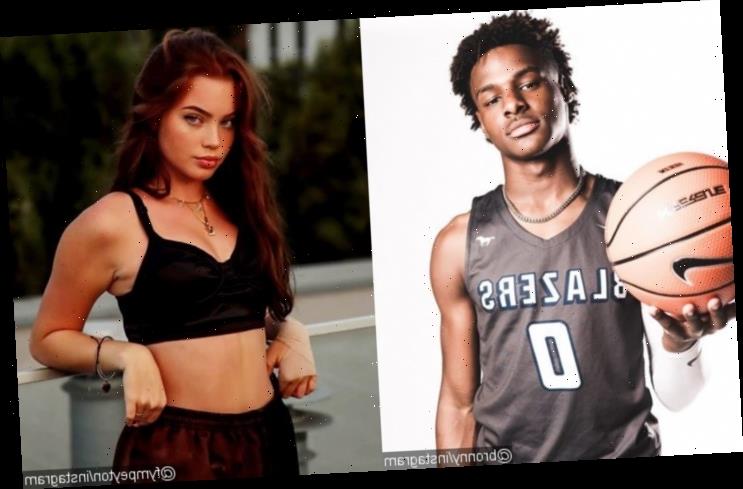 Rumors of the 15-year-old basketball player dating social media star Peyton sparks after the latter shares on her TikTok account a video of them attempting the Bop It challenge.

AceShowbiz –Bronny James‘ love life has once again become the center of discussion. Following rumors of him dating Damon Wayans, Jr.‘s daughter Amaya, people are now suspecting that the athlete is romancing social media star Peyton. Many are not feeling their reported romance though, considering the fact that Peyton is white.

Romance rumors between the two stars sparked after Peyton shared on her TikTok account a clip of her attempting the Bop It challenge with Bronny. The son of LeBron James could be seen smiling rather shyly as Peyton playing with his head. “I forced him to do this,” so the caption of the post read.

People started speculating that the two are dating, with a number of them attacking Bronny for dating a white girl instead of someone from the same race. “Hurts my heart to know there’s gonna be white in the James family, but that’s probably all Bronny is around so,” one person said. “Not Bronny dating a white girl,” another expressed his/her disappointment.

Fortunately for Bronny, there are people who come to his defense as they point out that people should not mind who the basketball player is dating at the moment because it is not their business. “Everyone talking about bronny’s relationship like they have a say in it. Go back to sleep u single f**k,” an individual wrote. “People really mad Bronny dating a white girl. go get a life lmao. Like he y’all son or even know him,” someone mocked the critics.

“There are fully grown adults with real-life adult problems on this website that are concerned about who a 15 year old is dating. Leave Bronny James alone you weirdos,” one other preached, while one more person said, “N***as got the light bill due next week and they worried about 15yr old Bronny dating a white girl.”

Will ‘The Mandalorian’ Go To Hoth Or Ilum In Season 2? The Ice Planet Looks Familiar
World News