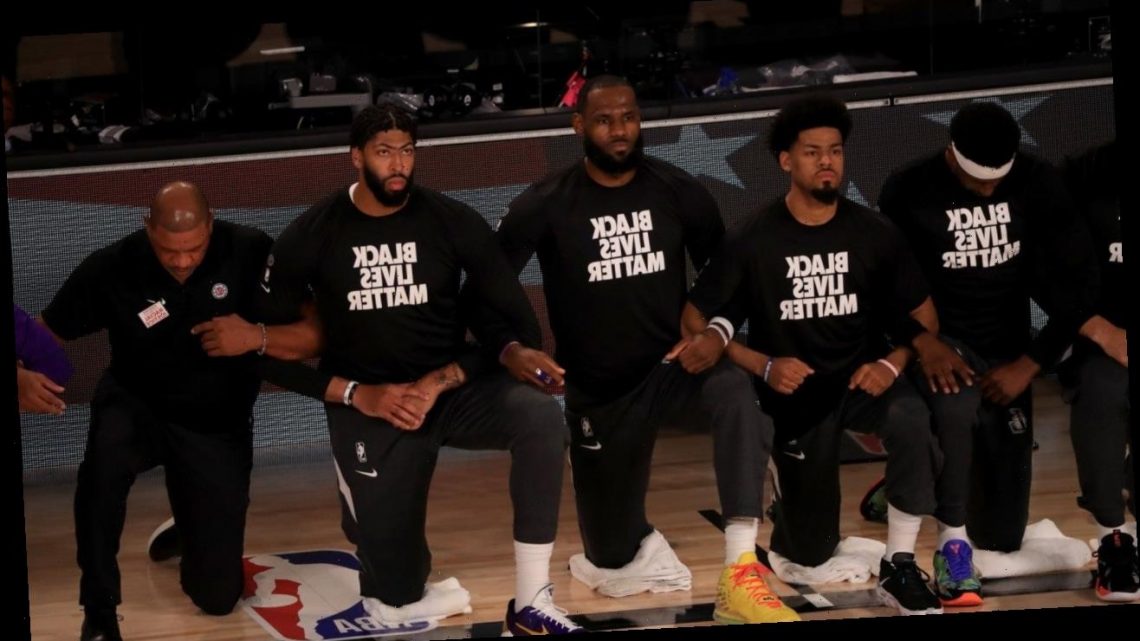 LeBron James, Anthony Davis and fellow NBA players kicked off the return of the season by showing their support for the Black Lives Matter movement during Thursday’s games. The game between the Los Angeles Lakers and the Los Angeles Clippers, held at The Arena at ESPN Wide World of Sports Complex in Lake Buena Vista, Florida, began with the players kneeling and wearing Black Lives Matter shirts as the Compton Kidz Club virtually performed the national anthem.

Utah Jazz and the New Orleans Pelicans did the same thing ahead of their game, with Jon Batiste playing the national anthem.

NBA commissioner Adam Silver expressed that he respects the “teams’ unified act of peaceful protest for social justice and under these unique circumstances will not enforce our long-standing rule requiring standing during the playing of our national anthem.”

Some players also donned league-approved social justice messages on their jerseys where their names usually appear. Among the phrases were “Say Her Name,” “Equality,” “Listen to Us” and “Liberation.”

The NBA players are in a coronavirus “bubble,” where teams are sequestered at Walt Disney World hotels for the remainder of the regular season games and upcoming playoffs to prevent the spread of the virus among players and their families. The athletes from 22 of the 30 teams started quarantining in the Walt Disney World Resort nearly a month ago to prepare for their return.

Ahead of the NBA restart, and as the players made their way onto the court, many couldn’t help but notice James’ fashionable accessory.

Meanwhile, the Detroit Pistons didn’t make the cut to travel to Orlando for the modified second half of the NBA season. However, Pistons power forward Blake Griffin told ET earlier this week that he couldn’t wait to see how the season played out.

“I think guys are just excited to play basketball again, and I’m excited to watch,” he expressed. “I’m trying not to pester these guys too much, because I’m sure everybody wants to know how the bubble is and is asking them the same questions, but [they’re] also trying to concentrate on their season.”

As for other issues facing the restarted NBA season — like a reignited conversation surrounding social justice initiatives and protests during the national anthem — Griffin thinks the decision should be made internally.

“I think however guys wanna express their support should be OK,” he noted. “I think one thing that basketball really did [well] — because we saw it happen with football first, and our season started a little later, back when this was sort of a bigger topic — was teams wanted to do something together, and I think that’s really powerful too.”

Hear more of what he shared in the video below.