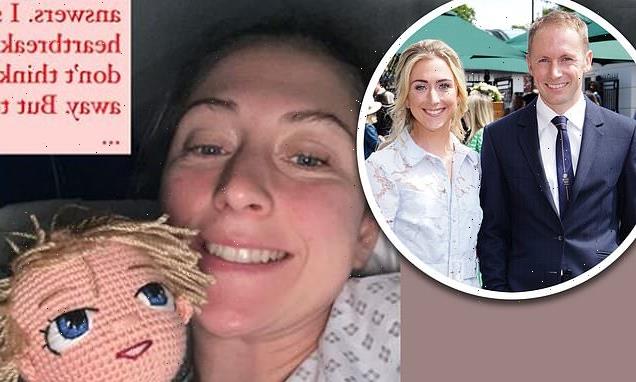 Laura Kenny has announced she is expecting her second child with husband Jason.

The five-time Olympic champion, 30, announced the happy news on Wednesday, which comes one year after she suffered an ectopic pregnancy.

The cyclist, who gave birth to son Albie in 2017, shared a post on her Instagram Stories where she admitted she has conflicting emotions about her pregnancy. 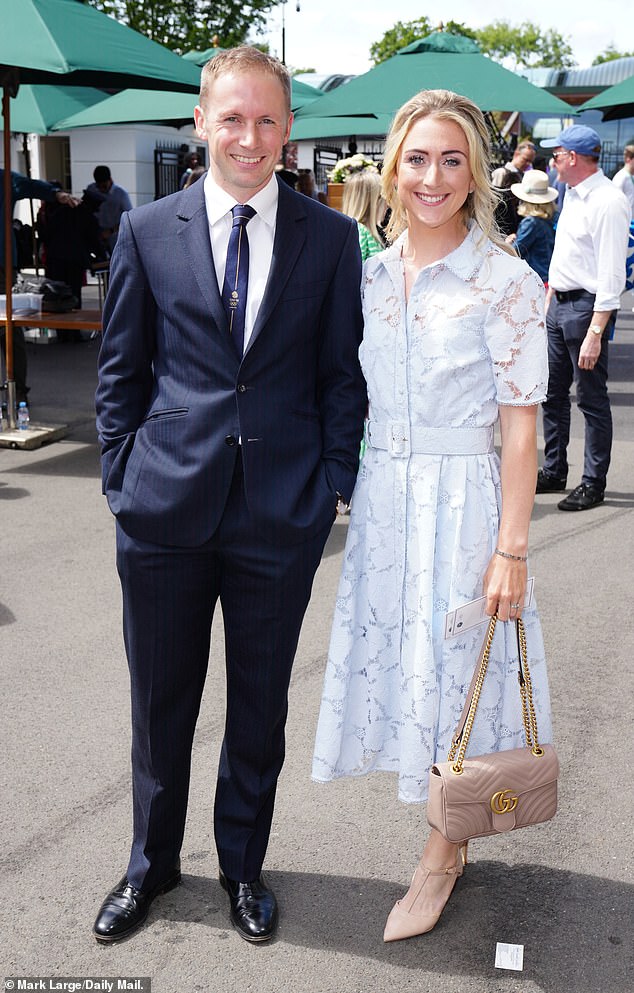 Congrats: Laura Kenny has announced she is expecting her second child with husband Jason

Laura began her post by sharing a photo of herself holding an ‘Albie teddy’ as she discussed her ectopic pregnancy.

She said: ‘A year ago today I was sat in A&E knowing I was really poorly but not knowing what was wrong with me.

‘When I got the news I was having an ectopic pregnancy my world felt like it crumbled.

‘We had already lost our second baby in November and I remember lying there searching for some sort of answers. I still feel this heartbreak today and I don’t think it will ever go away.’ 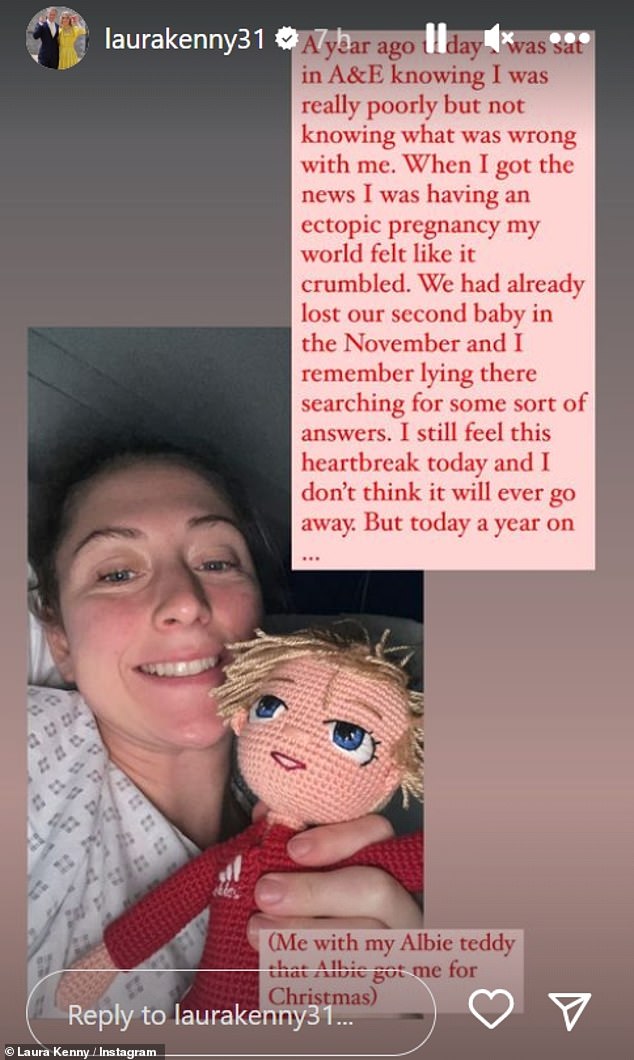 Post: The five-time Olympic champion, 30, announced the happy news on Wednesday, which comes one year after she suffered an ectopic pregnancy 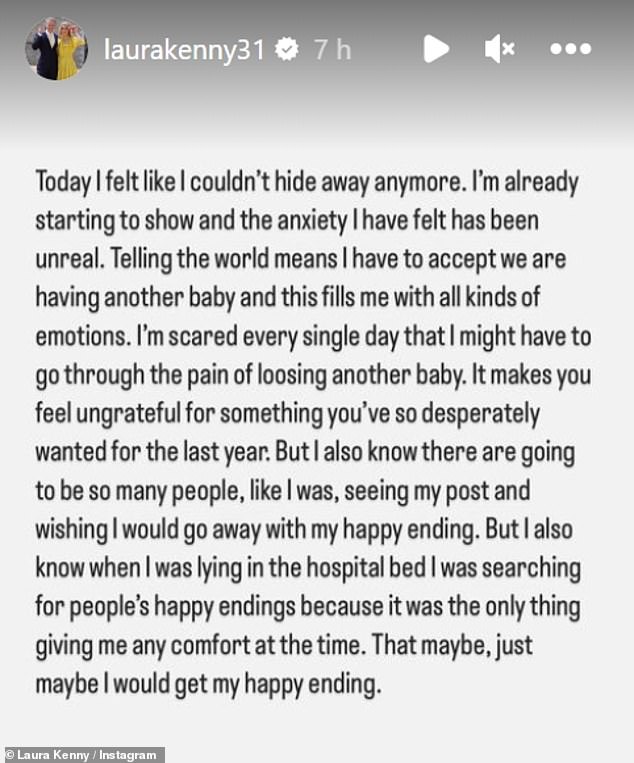 Announcement: She then shared another message saying she had chosen to announce her pregnancy but was having conflicting emotions about it

She then shared another message saying she had chosen to announce her pregnancy but was having conflicting emotions about it.

She wrote: ‘Today I felt like I couldn’t hide away anymore. I’m already starting to show and the anxiety I have felt has been unreal.’

‘Telling the world means I have to accept we are having another baby and this fills me with all kinds of emotions.’

The athlete then shared a photo of two adult bcycles alongside two kids’ bicycles to indicate her pregnancy and was inundated with well wishes from friends. 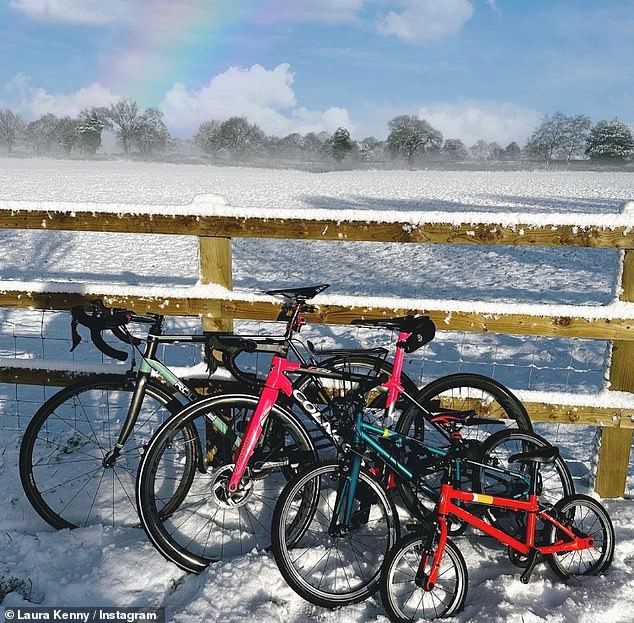 Announcement: The athlete then shared a photo of two adult bcycles alongside two kids’ bicycles to indicate her pregnancy 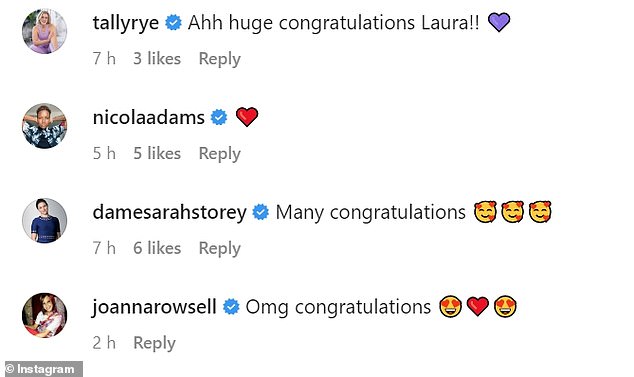 Reaction: The cyclist was inundated with congratulatory messages from friends

Laura admitted her fears of losing her baby, adding: ‘I’m scared every single day that I might have to go through the pain of loosing another baby.

‘It makes you feel ungrateful for something you’ve so desperately wanted for the last year. But I also know there are going to be so may people, like I was, seeing my post and wishing I would go away with my happy ending.

What is an ectopic pregnancy?

An ectopic pregnancy is when the embryo attaches to a different site than the lining of the uterus, where it should normally implant.

One of the most common places for ectopics is the fallopian tube. As the pregnancy grows, it stretches the tube leading to pain and, if untreated, they can rupture through the tube with the potential for life-threatening internal bleeding.

Most ectopics happen for no other reason than bad luck, though certain situations do make an ectopic more likely to occur.

These include falling pregnant with an IUCD (coil) in, previous surgery on the tubes or infection, such as chlamydia.

Tubal surgery can lead to scar tissue within the tube, increasing the chance that the pregnancy might get held up.

Infection may lead to damage to the fine hairs – cilia – that line the tube and help the egg to move toward the uterus.

‘But I also know when I was lying in the hospital bed I was searching for people’s happy endings because it was the only thing giving me any comfort at the time. That maybe, just maybe I would get my happy ending.’

Laura and Jason discovered they were expecting the month after they got back from the Tokyo Olympics in August 2021.

A few weeks later Laura was due to fly to Majorca to commentate for Eurosport when she started bleeding and called her midwife who reassured her spotting was common in pregnancy – so she travelled to the event.

She said that she had ‘tried to pretend everything was fine’ while she was working and still continued to commentate even though she was in huge amounts of pain.

Laura then ended up in hospital in Spain and told OK! of the miscarriages: ‘I had 10 minutes of being in absolute agony. I was bleeding at an unbelievable rate and I thought ‘I’m actually going to pass the baby’. It was horrific.

‘I had no prior experience of miscarriage and I didn’t know any friends who had either. My mum only told me she’d had one after I told her what had happened.

She continued: ‘I see my body as a machine and it failed me for the first time in 11 years and that was hard to accept. I’d cry on Jason a lot. It just felt so heartbreaking. It took me a long time to process the grief.’

Laura then told in the interview that Jason bought her a rose tree to put in the garden in memory of their baby which she says ‘helped her move on’.

The next month she suffered an ectopic pregnancy at seven weeks and had to be rushed to hospital with severe dizziness, sickness and shoulder pain.

After key-hole surgery to save her life which sent her into ‘full-blown panic’ she once she was discharged she returned home in ‘disbelief’ after the ‘near-death’ experience. 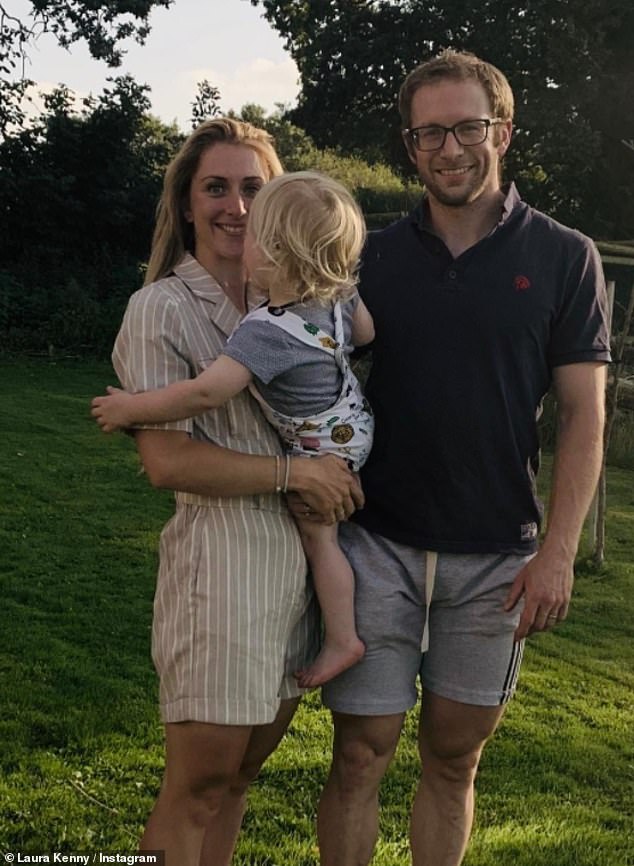 The cyclist became the most successful female cyclist in Olympic history in 2021 after winning gold in Tokyo alongside Katie Archibald in the women’s madison, having earlier taken silver in the team pursuit.

Laura has six Olympic medals across three Games, including five golds, while Jason, is the country’s most decorated Olympian.

Laura and Kenny’s relationship was revealed during London 2012, when they were spotted kissing in the crowd as photographers focused on David Beckham in the row in front of them.

For help and support contact The Miscarriage Association on 01924 200799

What causes a miscarriage?

It is highly unlikely that you will ever know the actual cause of a one-off miscarriage, but most are due to the following problems:

The most common cause of miscarriages in the first couple of months is a one-off abnormal development in the fetus, often due to chromosome anomalies. ‘It’s not as though the baby is fine one minute and suddenly dies the next,’ says Professor James Walker, Professor of Obstetrics and Gynaecology at the University of Leeds.

‘These pregnancies fail from the outset and were never destined to succeed.’ Most miscarriages like this happen by eight weeks, although bleeding may not start until three or four weeks later, which is worth remembering in subsequent pregnancies. ‘If a scan at eight weeks shows a healthy heart beat, you have a 95 per cent chance of a successful pregnancy,’ says Professor Walker.

A hormonal blip could cause a sporadic miscarriage and never be a problem again. However, a small number of women who have long cycles and irregular periods may suffer recurrent miscarriages because the lining of the uterus is too thin, making implantation difficult.

‘There used to be a trend for progesterone treatment, but trials show this really doesn’t work,’ warns Professor Walker. ‘There is some evidence that injections of HCG (human chorionic gonadotrophin, a hormone released in early pregnancy) can help, but it’s not the answer for everyone.’ The treatment must be started as soon as the pregnancy is confirmed, at around four or five weeks.

Around 20 per cent of recurrent miscarriers suffer from lupus or a similar auto-immune disorder that causes blood clots to form in the developing placenta.

A simple blood test, which may need to be repeated several times, can reveal whether or not this is the problem.’One negative test does not mean that a women is okay,’ warns Mr Roy Farquharson, consultant gynaecologist who runs an early pregnancy unit at the Liverpool Women’s Hospital.

Often pregnancy can be a trigger for these disorders, so a test should be done as soon as possible,’ he adds.But it can easily be treated with low dose aspirin or heparin injections, which help to thin the blood and prevent blood clots forming – a recent trial also showed that women do equally well on either. ”We have a 70 per cent live birth rate in women treated for these disorders,’ says Dr Farquharson, ‘which is excellent.’

While uterine abnormalities, such as fibroids, can cause a miscarriage, many women have no problems carrying a pregnancy to term. An incompetent cervix can also cause miscarriage at around 20 weeks.

While this can be treated by a special stitch in the cervix, trials suggest it is not particularly successful, although it may delay labour by a few weeks.Gene and chromosomal abnormalities, which can be detected by blood tests, may also cause recurrent miscarriages in a small number of couples.

A procedure known as preimplantation genetic diagnosis can help. After in-vitro fertilisation (IVF), a single cell is taken from the developing embryo and tested for the gene defect. Only healthy embryos are then replaced in the womb.

It is an expensive and stressful procedure – and pregnancy rates tend to be quite low – but for some this is preferable to repeated miscarriages or a genetically abnormal baby.