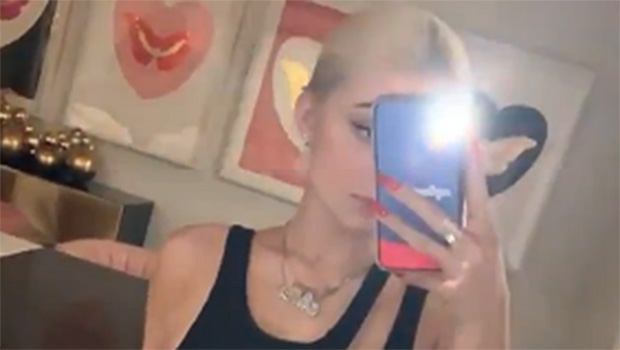 Ten months after welcoming baby Stormi Webster in the world, Kylie Jenner looks like she was never pregnant, as she busted out a waist trainer to flaunt an incredibly slim hourglass figure!

“All right. I have on this cute sports bra with this cutout,” Kylie Jenner, 21, said on her Instagram stories on Dec. 11, as she was showing off the SECNDNTURE’s new all-black collection. Kylie’s BFF, Jordyn Woods, hooked the Keeping Up with the Kardashians star with some new clothes and Kylie accessorized them SECNDNTURE’s waist trainer, giving her an outrageous silhouette. Considering that Kylie gave birth to Stormi less than a year ago, it’s kind of wild to see her flaunt such a tiny, tiny waist.

Kylie in a waist trainer/corset top is nothing new, as she wore plenty long before she met her baby daddy, Travis Scott, 26. She even wore one in March 2018, mere weeks after she welcomed Stormi into the world. She was actually promoting the line from Waist Gang Society (“My girl…hooked me up with the…snap back package.”) This promotion didn’t really sit well with fans, who clapped back at her support of the snap back waist trainers. “How can u be so filthy rich and still sell out for something that is so dumb and could potentially perpetuate negative body image in young girls,” one fan said at the time, echoing the feelings of many who thought the ad, done so soon after her pregnancy, was in poor taste.

The KUWTK star’s recent drama has been less about her body and more about body doubles. Travis was the victim of a hoax that made it look like he had cheated on Kylie. In truth, it was YouTube personality Christian Adam, who dressed up as Travis and pretended to make out with another girl, causing fans to accuse Travis of being unfaithful. Kylie, after learning of the cruel prank, clapped back. “[I Don’t Know] if this is really a social experiment to some people, but you’re messing with real people, real relationships, real family,” Kylie said.

“I’m happy my relationship is strong because this is getting out of hand. The internet scares me sometimes for real,” she said. If fans need any proof as to how strong their relationship is, all they have to do is see the adorable pictures of the three of them – Travis, Kylie and Stormi – visiting an aquarium as a family. Adorable!