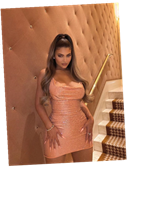 Well, chalk up yet another milestone of success for Kylie Jenner.

After becoming the first member of her family to achieve a net worth of $1 billion, Kylie has now beat her sisters to yet another wildly impressive achievement.

The youngest of the Kardashain-Jenner sisters is now the first member of the family to amass a following of over 200 million on Instagram.

It’s an accomplishment that’s reserved for the A-list of the A-list, the most internationaly renowned and best-loved human beings on the planet.

Kylie has joined the ranks of Cristiano Rinaldo, who leads the pack with 241 million.

He’s followed by the likes of Ariana Grande and The Rock, who lead musicians and actors with 205 million and 202 million followers, respectively.

So Kylie has ways to go in terms of catching up with the site’s most popular accounts.

But a reality star and cosmetics mogul staking her place alongside the world’s most famous actors and entertainers is undeniably impressive.

Not only that, Kylie has taken an impressive lead over her sisters.

Kim Kardashian is currently ar 191 million followers, but no one else in the family even comes within 50 million of Kylie.

Kendall Jenner is no slouch with 141 million; Khloe Kardashian follows relatively close behind with 122 million; while Kourtney Kardashian brings up the rear with 103 million.

For her part, Kris Jenner contributes a sizable sum to the family total with 37 million followers.

That might actually be a record forn the 60-and-over crowd.

As for Kylie’s sudden surge, we imagine it has something to do with her wildly popular quarantine content.

Throughout the coronavirus lockdown, Kylie has been serving up epic thirst traps, much to the delight of her homebound fans.

Kylie Jenner’s Sexiest Photos of 2020: At Least SOMETHING Good Came Out of This Craptastic Year!Start Gallery

Sure, being grounded by the government is never easy, but the sight of Kylie twerking in a bikini makes it somewhat more tolerable.

Anyway, we suppose Kylie has joined Jeff Bezos and companies that manufacture surgical masks on the short list of people who actuallyu benefited from the coronavirus outbreak.

We’re happy for her, but if she reached the level of multi-billionaire, we might need her to start sending out stimulus checks to her followers.