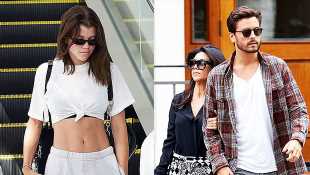 Kourtney Kardashian admitted that the ‘hardest part’ of co-parenting with Scott Disick was entering new relationships, which caused ‘fights’ in the beginning. Therapy improved their communication.

Exes Kourtney Kardashian, 40, and Scott Disick, 35, had to work up to the point where Sofia Richie, 20, could tag along for family vacations, which was discussed in a conversation about co-parenting that was uploaded to Poosh on April 29. “I was talking to my mom [Kris Jenner] today and she was like, ‘I’m so proud of you for going to Finland with Scott and Sofia, and you guys are doing such a great job. I’m so proud of you.’ But I feel like people will either look at us like we’re crazy,” Kourtney told Scott in the video above, referencing her birthday trip to Finland that happened in early April.

“I’d rather people look at us like we’re crazy and we get to spend time together and raise our family together, than doing it the other direction,” Scott replied. The father to Kourtney’s three kids Mason, 9, Penelope, 6, and Reign, 4, admitted that “it’s not the easiest thing for us” but “couldn’t imagine raising three children with somebody that I couldn’t speak to every day.” To get to that point, they had to overcome the “hardest part” about co-parenting after breaking up in July of 2015 — which was starting “new relationships,” Kourtney confessed.

“That caused fights between you and I, about introducing the kids,” the Poosh founder continued to explain of the difficulties she and Scott faced after they moved on to new significant others. Kourtney nor Scott didn’t specifically name any lovers. However, Scott’s most high-profile relationship after splitting with Kourtney was with Sofia, whom he is still seeing after their romance was confirmed in Sept. 2017. Meanwhile, Kourtney most famously dated model Younes Bendjima, 25, from May 2017 to the late summer of 2018, so we can only assume that these romances affected their co-parenting. “I felt like we had to literally go to therapy to talk…to even get through, to be able to like communicate together,” Kourtney revealed of this transition period in her and Scott’s dating lives.

Scott and Kourtney’s conversation about co-parenting arrived just one day after a psychic told Kourtney that she and her ex were “soulmates” on Sunday’s episode of Keeping Up with the Kardashians. “Scott came in, and the guy was basically saying that in a past life that we were together, and that we’re soulmates. So, he was like, ‘You have to decide if you want to be together or not be together,’” Kourtney told her sisters in the shocking scene. Scott and Kourtney first entered one another’s worlds after meeting at film producer Joe Francis’ house party in 2006.

Giants GM Dave Gettleman responds to NFL draft backlash: ‘We’ll find out how crazy I am’