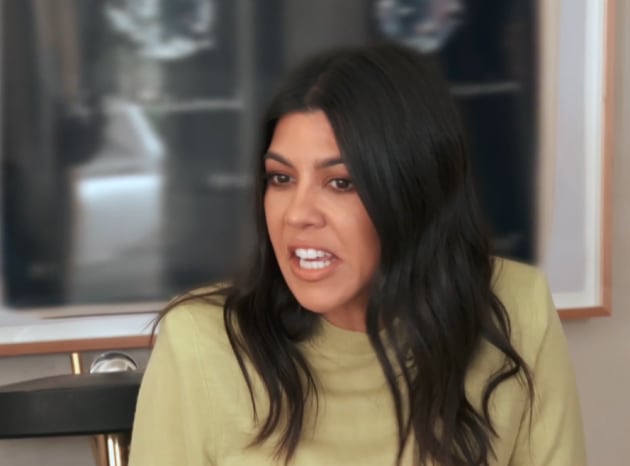 Kourtney Kardashian: My Business is Failing and Kris Doesn’t Care!

Every year, it seems more and more likely that Kourtney Kardashian will quit the family show. Somehow, that day never comes.

Maybe if Kourt’s latest business venture had been a smash hit, she’d drop the reality gig. Instead, it’s been a colossal disappointment.

Kourtney knows just whom to blame for this — her momager, Kris Jenner.

RadarOnline reports that the eldest of the Kardashian children is irritated that her new brand isn’t a soaring success.

“Kourtney doesn’t understand why Poosh isn’t taking off like she was hoping,” and insider shares.

“But,” the source reveals. “She is blaming Kris.”

“She thinks Kris has focused so much of her time and energy into Kylie and Kim,” the insider explains.

In Kourt’s eyes, the source details, “she completely neglected her.”

But what’s the real problem?

According to the insider, “she is failing to recognize that her s–t is overpriced.”

“And,” the source adds. “Most of her fans simply cannot afford the Poosh lifestyle.”

“It is like she is trying to be Gwyneth Paltrow,” the insider characterizes.

“But,” the source emphasizes. “She is not Gwyneth.”

Kris may be her mom and her manager, but there’s no way that Kris had so much control over Poosh that it lived or died on her influence.

Kourtney’s complaint does make a lot of sense.

Eldest siblings carry a special burden — once they are no longer only children, it’s easy for parents to overlook their emotional needs in favor of younger siblings.

It makes sense that Kourtney would feel some emotional baggage about that. But … it’s hard to see that as being why Poosh is a laughingstock.

In a number of ways, the site feels like something out of another era.

In contrast, quack content look Gwyneth Paltrow’s Goop stays around because the diet advice is disguised as “clean eating” and “wellness.”

A lot of people these days are understandably leery of checking out products claiming to give them a flat tummy.

Kourtney launched Poosh back in April.

The aim was to bring her favorite products and advice to fans.

Since she feels that Kris has dropped the ball, Kourtney is consulting with an outside firm to figure out where she went wrong.

It sounds like cheaper products that are better targeted at her intended audience would be a good start.

It’s just a shame that she didn’t troubleshoot Poosh so thoroughly before its launch. She could have saved herself some grief.

It makes sense that Kourtney would want to be able to set up a lifestyle site as her venture.

Khloe has a clothing line. Kim and Kylie are makeup moguls. Kendall is a supermodel.

Hey, even Rob has his line of socks.

Reality stardom has made Kourtney incredibly rich, but she wants a revenue stream of her own like everyone else in the family.

More power to her. We wish her the best as she reconsiders what Poosh needs to be.