Home » Celebrities » Kourtney Kardashian: Here’s Why I Stopped Having Sex With Travis Barker 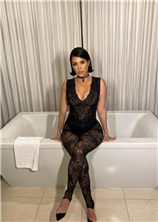 Kourtney Kardashian: Here’s Why I Stopped Having Sex With Travis Barker

Even in 2022, some couples prefer to “save themselves for marriage.”

That exercise seems a little pointless when you’re both in your forties and you have kids from previous relationships, but who are we to judge?

Anyway, there are certainly no mysteries regarding the sexual compatibility of Kourtney Kardashian and Travis Barker.

From the very beginning of their relationship, Kourtney and Travis’ PDAs were so frequent and so demonstrative that both of their most famous exes complained.

Needless to say, these two don’t seem like the type to hold off until the honeymoon, a la Russell Wilson and Ciara.

So you can imagine our surprise when Kourtney announced that she had embarked on a “sex fast.”

Now, Kourt didn’t keep her distance from Travis for moral or religious reasons.

Rather, the period of celibacy was part of a cleanse advocated by her Poosh lifestyle brand.

We’re not sure how refraining from knocking boots is supposed to help your body cleanse itself, but amazingly, it seems that Kourtney would recommend the experience.

“Oh my God, it was crazy,” Kourt told Bustle in a recent interview.

“But it actually made everything better. Like, if you can’t have caffeine, when you have your first matcha, it’s so good.”

We’re guessing Travis’ review of the experience would be considerably less glowing.

Kourtney says that as a woman in a monogamous relationship she felt the need to do some experimenting for the sake of her website’s growing readership.

“What about people who are just so into each other and don’t need any of that? Like, should we write a story on that?” she asked.

Anyway, the good news for Travis’ drumstick is that Kourtney’s fast appears to have come to an end.

As for what’s next for these two, that remains to be seen.

For a while there, it looked as though they had managed to placate at least one of their seething exes.

Insiders said that after vowing not to, Kourtney decided to invite Scott to her wedding.

But that encouraging sign was followed by the news that Disick had unfollowed all of the Kardashians on Instagram.

So it sounds like it might be a while before Kourtney is able to rebuild the civil co-parenting relationship that she and Scott once enjoyed.

Or maybe that ship has sailed, and Scott and Kourt will never be on good terms with one another ever again, all because he insists on being a big baby.

Perhaps Scott and Kanye should get together and form a society for toxic losers who are still obsessed with their exes despite the fact that said exes have clearly moved on.

Meanwhile, Travis and Pete Davidson will be busy with more fulfilling endeavors, if ya know what we mean.

Kourtney might have gone on a sex fast, but we’re sure she and Travis are now feasting on each other ahead of their wedding.