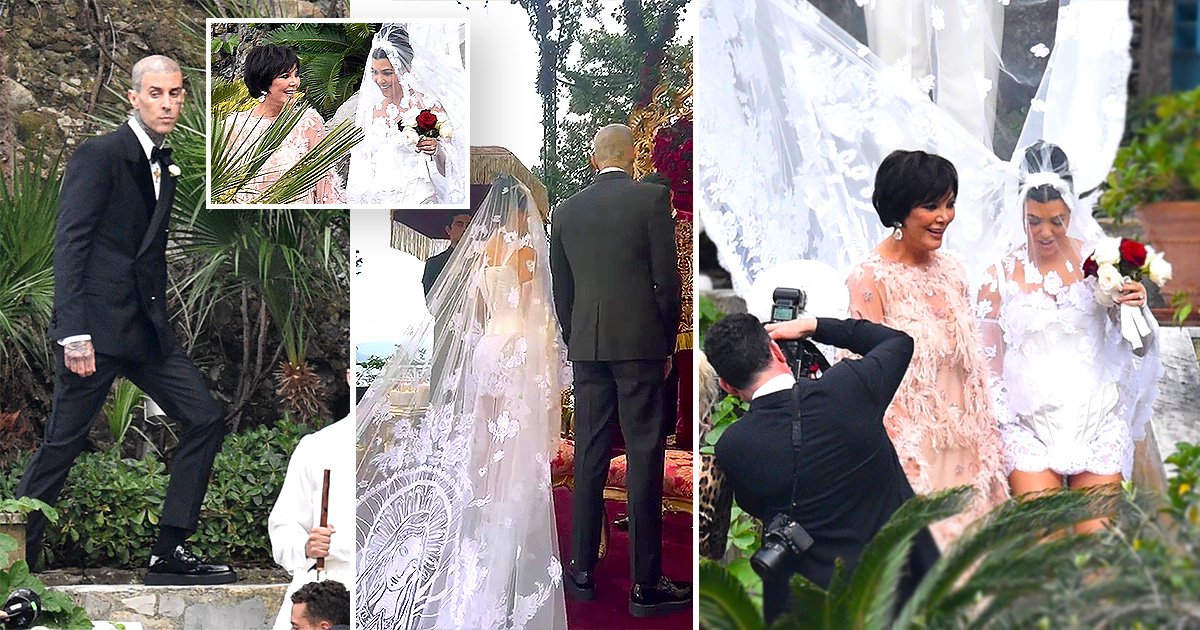 Kourtney Kardashian and Travis Barker are officially married for the third time after exchanging vows in a lavish wedding ceremony in Portofino, Italy.

The Keeping Up With The Kardashians star, 43, got hitched to the Blink-182 drummer, 46, in front of their loved ones, with Travis’s daughter Alabama sharing the first glimpse at the bride’s stunning dress.

After getting fans excited in a gothic black dress on Saturday, Kourtney was pictured at the alter in a gorgeous Dolce & Gabbana gown complete with a flowing floor-length white veil.

Travis was equally dapper in a luxurious suit by the same Italian designer.

Kourtney’s children, Mason 12, Penelope, nine, and seven-year-old Reign – who she has with former partner Scott Disick – were in attendance for the ceremony, along with her mother, Kris Jenner.

On Travis’ side were his son Landon, 18, daughter Alabama, 16, stepdaughter Atiana De La Hoya, 23, and friends including Machine Gun Kelly and his Blink-182 bandmate Mark Hoppus.

According to MailOnline, 43-year-old Kourtney entered the garden for the outdoor ceremony at Castello Brown on the arm of her mother while ‘Ave Maria’ was sung.

They then exchanged vows as dusk fell, before posing for photos ahead of further celebrations this evening.

Kourtney and Travis have rented out the entire castle, which was built during Roman times as a military defense, and as well as their four-day Italian celebration, they are also planning another huge reception for their friends back in Los Angeles.

Before the ceremony, Kourtney posed up a storm in a mini black Dolce & Gabbana dress that featured an emblem of the Virgin Mary appliqued underneath the bust.

Kourtney’s outfit, which was put together by celebrity stylist Dani Michelle, was complete with satin gloves and black heels. She accessorised with a stunning black veil with blue lace detailing.

Kourtney’s sister Kylie Jenner was among the many celebrities responding to the photo, writing: ‘💙💙💙💙’

Kourtney and Travis went public with their romance in early 2021 before getting engaged in October.

Travis proposed on a Malibu beach, with the romantic moment recently unveiled in an episode of the new The Kardashians series.

The couple had earlier held a ‘practice’ wedding after the Grammys in April hosted by an Elvis impersonator at 2am, but it wasn’t valid as Kourtney and Travis didn’t obtain a marriage licence beforehand.

However, they legally married in Santa Barbara last week with Kourtney’s grandmother MJ and Travis’ dad Ted as witnesses.

The couple shared the stunning black and white photos from the intimate service, which took place on the steps of a courthouse, and, of course, was PDA-heavy.

Kourtney revealed a photo from the wedding with her 177million followers last week, showing her and her new husband seated in a black convertible kissing with ‘Just married’ and cans tied to the rear bumper.

‘Till death do us part,’ she captioned the photo.

Travis shared an identical post to his 6.9million followers with the same image and caption.