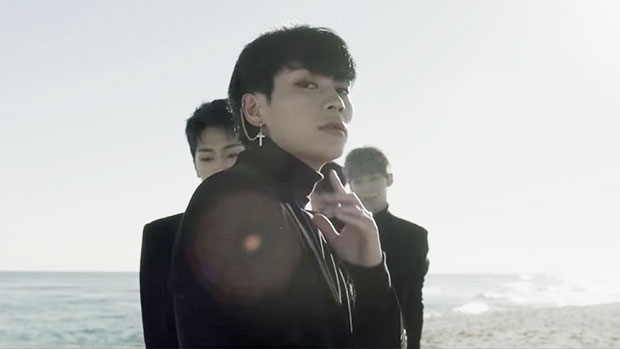 2018 was a rollercoaster of a year for KNK, but the group is back and better than ever with a new single — and a new member! Listen to ‘Lonely Night’ here!

KNK has done it again! The K-pop group released their first single after terminating their YNB Entertainment contracts in September, and fans are loving “Lonely Nights.” The music video dropped Jan. 7, and while there are five members performing in it just like in their last, there have been some major changes to the K-pop group! That’s because Youjin, left KNK last year because of his panic disorder, and the remaining four members Seoham, Inseong, Jihun, and Heejun, have stayed on with new member Dongwon.

And so far, fans are all for this! “I’m so proud of KNK. They have gone through many things but they are still standing. They did such an amazing job and I’m so happy for Dongwon. He debuted with one of the best groups. Tinks will take good care good you! Lets make great memories!” one KNK lover tweeted, while another added, “KNK went through a lot in the past year but they defeated all odds and came back. I’m so happy to have them back & I’m so proud of them DAMN I MISSED MY SEXY MEN also I can’t wait to see more of Dongwon.” Fans may be missing Youjin, but many noted that he is probably feeling so proud of his friends after this fire release!

In the “Lonely Nights” video, the guys switch between singing on the beach or alone in an art studio. But arguably the best part of the exciting new release is the dancing portion featuring all five members in suits. “That’s some nice choreo in there,” one fan wrote.

This has undoubtedly been a rough year for the K-pop group, but while so much has changed, it’s amazing to see them coming back with a bang! Watch the video above — it’s not one to miss!