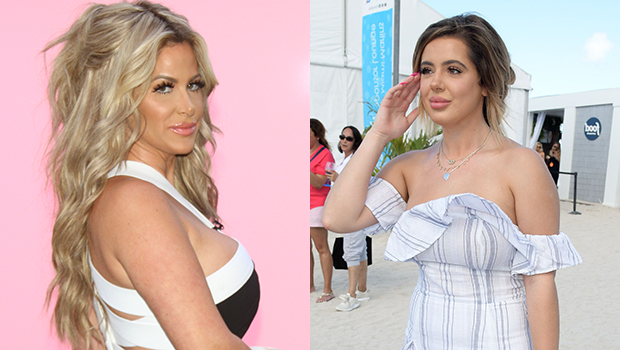 Who wore it better? — Both Kim Zolciak and daughter Brielle Biermann shared revealing bikini photos in cheeky swimsuits while on vacation! Brielle bared her booty in a thong bikini, while Kim went topless in nothing but a cheeky swim bottom.

Two of a kind! — Brielle Biermann, 22, and Kim Zolciak-Biermann, 40, are the ultimate mother-daughter duo, especially when it comes down to posting the best vacation pics. The Don’t Be Tardy stars both shared similar bikini photos while on a family vacation, where they showed off their bare butts in cheeky swim bottoms. Brielle, who wore a blue striped thong bikini opted for a closeup photo of her backside. Meanwhile, Kim followed up with a topless snap, which showed off her booty as she made her way to the beach.

If you decided to weigh in on the playful bikini photo rivalry between the Brielle and Kim, you may know that Brielle was the first to post her booty-baring shot. The oldest of the Biermann siblings sprawled out on a rock in the middle of the ocean, where she put her entire backside on display in a photo she shared on April 1. “Sunny & 75 and y’all still have a better view than I do,” she captioned the pic, which also featured her long, blonde hair in a braid.

Kim took a page out of her daughter’s book when she shared a sultry snap of her own the very next day. “Dreaming Blessed and Grateful,” the mother of six, who went topless on her way to the beach, captioned her photo. She showed off her booty in a layered blue swimsuit bottom, wearing nothing else but an oversized floppy hat — similar to the one she wore in a completely nude photo she shared from vacation one day prior.

The Zolciak-Biermann family is currently on vacation in an undisclosed beach location, where they’ve been sharing individual and family snaps all week long. Kim’s husband, Kroy Biermann, 33, is also there, as Kim credited the former NFL pro for snapping her nude photo.

It appears as though the rest of Kim’s children —  Adrianna, 17, KJ, 7, Kash, 6, and twins, Kaia, 5, and Kane, 5 — are present on the beach getaway, according to social media videos. Brielle previously snapped a photo of little sis, Kaia in a neon green bikini, and Kim also shared the same pic. Arianna, who recently lost 30 pounds, also shared a pretty photo on the beach in a red bikini.

Jordyn Woods ‘Excited To Fall In Love’ One Day — But, She’s In No Rush After Tristan Thompson Drama

Jordyn Woods ‘Excited To Fall In Love’ One Day — But, She’s In No Rush After Tristan Thompson Drama
World News