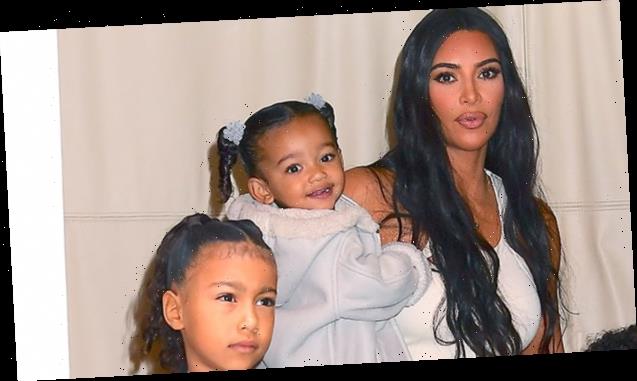 Kim Kardashian captured her adorable daughters, North and Chicago, sharing a sweet moment in a series of photos she posted to social media, featuring her little ones doing their own ‘photo shoot together!’

Photogenic faces run in this family! In a new post that Kim Kardashian shared to her Instagram account on August 25, the mother-of-four, 39, captured a series of images featuring her seven-year-old, North West, and two-year-old, Chicago West, cozying up to one another for their own mini-photo shoot. The moment was completely impromptu, as it appeared the trio was outside enjoying the fresh air and sunshine before the snaps were even taken by Kim.

My girls wanted to do a photo shoot together sitting up on this rail. Swipe to the right to see how it ended 🤣🤠🥰

“My girls wanted to do a photo shoot together sitting up on this rail. Swipe to the right to see how it ended,” Kim captioned the carousel post, and the pictures were truly worth 1,000 words! The first image was undoubtedly one of the sweetest, featuring both North and her little sis looking at the camera with big smiles across their faces. In the second and third, the little girls goofed around, making faces at one another with Chicago even sticking her tongue out.

The fourth pic was super cute, too. The two sisters shared a moment where their eyes were totally locked on one another. However, it looked like the end of the photo shoot didn’t go to plan, as Kim shared the final image that was captured just as North jumped off the rail and Chicago fell forward! Despite the last pic, friends and fans loved the images and took to the comment section to fawn over the girls!

“So cute,” Vanessa Bryant commented on Kim’s post. Kim’s longtime pal Jonathan “Food God” Cheban also left a sweet message, saying, “WOW,” with a shooting star emoji. Other fans couldn’t get over how “stunning” Chicago and North looked. Some even likened the two little girls to Kim and her sisters, calling them “supermodels in the making.”

But sweet moments between these sisters are common place, at this point. The two little girls were previously captured by their mom on Sunday, August 16, at their dad Kanye West‘s Sunday Service in Wyoming. In the video that was shared to Kim’s Instagram Stories, North was seen giving little Chicago a piggyback ride while the two wore matching orange outfits. Unfortunately, North wasn’t able to hold up Chi Chi for too long and dropped her sister on the ground by the end of the clip! As these two grow up right before fans’ eyes, we know there are plenty more sweet, sisterly moments in store for the future!