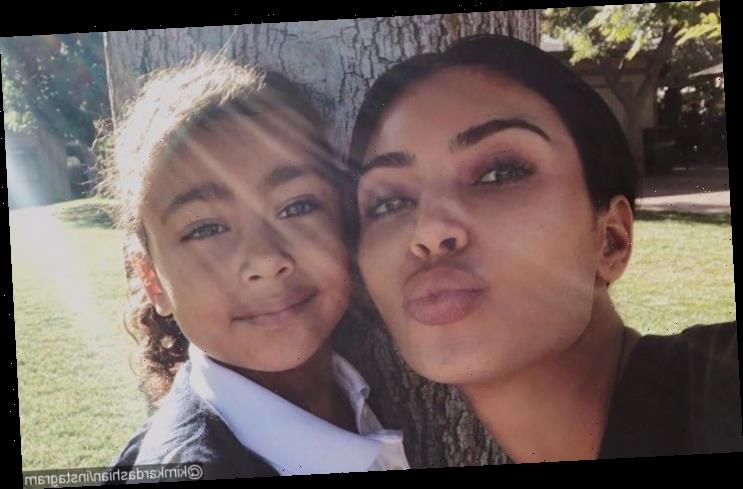 After 6-year-old North keeps on crashing her tutorial filming, the ‘Keeping Up with the Kardashians’ star admits to the camera that she is actually hiding from her children in the guest room.

AceShowbiz –Kim Kardashian could not find some quiet time for herself during coronavirus quarantine. The “Keeping Up with the Kardashians” star has recently been caught on camera getting called out by her oldest daughter after she complained over the youngster’s disruption when she tried to do her make-up tutorial.

In an Instagram video she posted on Thursday, April 9, the 39-year-old attempted to share with fans a step-by-step demo to her “home beauty routine.” It was not long before 6-year-old North came into the view unannounced. Yet, the mother of four appeared to be able to get her daughter to leave her alone at first.

When Kim was working on her eyebrows, North made her return, prompting the TV personality to ask, “What, sweetie?” When North answered by informing her that she wanted to wash her hands, Kim replied, “Can you do it in another room? I’m in the middle of something. I don’t want to get this all wet, sweetie.”

Frustrated, Kim then begged her oldest daughter with Kanye West, “North, can I please do my tutorial? It’s all I want to do – one little fun thing for myself.” Despite her plea, North could still be seen barging into the bathroom where Kim was filming her tutorial. After letting out an irritated sight at one point in the video, Kim continued to finish her look.

Kim’s distress was relatable to other mothers stuck in self-isolation with their family. One said, “Honestly don’t feel like I can relate to you usually. But this late 30’s Libra momma feels EXACTLY THE SAME WAY!!!! Kids won’t leave me alone. Can’t even shower without hearing MOM!!!!!!!” Another shared similar sentiment, “All moms relate to this!! Lol Just 5 min pleaseeee.”

The younger sister of Kourtney Kardashian has previously opened up about how difficult it was for her to control her kids during the COVID-19 lockdown. “Being at home with four kids – if I ever thought for a minute that I wanted another one, that is out the door,” she spilled during an appearance on “The View” in late March. “It’s really tough. It’s really tough.”

In addition to North, Kim is also mother to 2-year-old daughter Chicago and two other sons, 4-year-old Saint and 10-month-old Psalm.

Putting coronavirus patients on ventilators could do more harm than good, doctors warn – The Sun