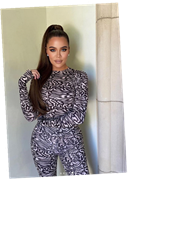 Many years into the future, historians still be sorting out of the events of 2020, and one thing they’ll certainly agree on is that it was a year of sacrifice.

Americans from all across the country and all demographics were put to the test this year — perhaps none more than so Khloe Kardashian.

Yes, Khloe shared her tale of woe and hardship in a recent interview, and it’s just like something out of Dickens.

Except in this version, Dickens’ characters all live in mansions, and they’ve had a ton of expensive work done.

Khloe is getting roasted within an inch of her life on Twitter today after patting herself on the back for raising her 2-year-old daughter, True, without any nannies during the pandemic.

“I had to learn to adapt by doing mommy-daughter workouts,” Khloe complained.

“[True] is obviously not working out, but it’s things like me putting her in a wagon and sprinting up a hill. I belted a wagon to my waist because I don’t have any help. We’re all just trying to figure it out,” she added.

Yes, Khloe just referred to the people she pays to help raise her kid as the “help.”

We didn’t know that level of tone-deafness was still possible.

“I want to show my daughter, by example, that there are healthy ways to be active every day,” Khloe continued, in self-congratulatory fashion.

“I like to work out early, it just sets the tone for the rest of my day, it makes me want to eat better and be active and healthy. By her seeing me like this, I hope she’s active and takes care of herself,” she concluded.

Clearly, Khloe was trying to send a message about self-care, but it got lost in a muddle of clueless, classist nonsense.

Predictably, the twitterati were quick to roast True’s mom for her ill-considered comments.

“So she’s doing something Millions of families are doing? She’s like a Modern day Mother Teresa…” another added.

“Well that is what’s called being a parent lol,” a third chimed in.

“Must be horrific for her to have to watch her own kids,” a fourth wrote.

You get the idea.

It was the latest in a very long line of PR missteps for Khloe.

Fans first began to suspect that she’s no longer the cool, relatable, down-to-earth Kardasshian when she started photoshopping her Insagram posts to an absurd degree earlier this year.

Khloe was unrecognizable in some of the pics.

It was all very strange, and veryn surprising.

It seems Khloe is no longer interested in being the relatable sister and has decided she’d prefer to be as enviable and out-of-touch as the rest of her sistrs.

Sort of a bummer, really — there was a time when she was truly one of a kind.

How Actress Allison Mack Groomed India Oxenberg For Sex Abuse in Nxivm: 'I Wanted to Believe' Her
World News