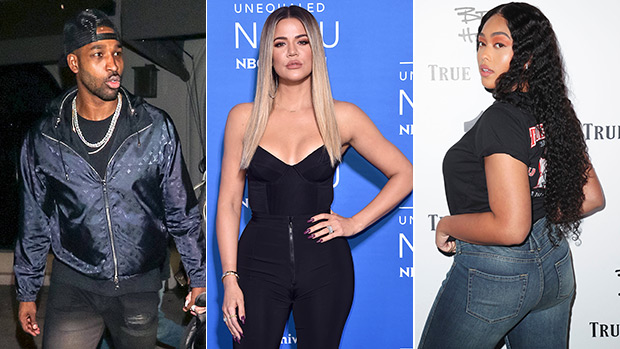 Despite previous reports alleging that Jordyn Woods and Tristan Thompson kissed, Khloé Kardashian’s recent Twitter like indicated that they did more than that!

“She slept with Khloé’s baby daddy, and they haven’t even publicly said ONE bad thing about her, just unfollowed her, so how is that the [Kardashians’] fault,” a Twitter user said in a tweet that Khloé liked. “Jordyn smeared her OWN name!”

The original tweet that started a string of quote tweets stated how Jordyn will be appearing on 47-year-old Jada Pinkett Smith’s show Red Table Talk to “tell her side” of the story. “[Jordyn] and her family are REAL cool with the [Smiths] so I really want them to paint her in a good light,” another user said in a quote tweet. “The [Kardashians] are obviously smearing her name for ratings, but Jordyn deserves a win!” The tweet that Khloé liked was a response to that tweet.

If Jordyn did sleep with Tristan instead of just kissing him, that would likely be even more of a betrayal to Khloé, and Jordyn’s best friend, 21-year-old Kylie Jenner, and could explain the outrage and reaction from the KarJenners and their friends. It was previously reported that Jordyn and Tristan kissed at his Los Angeles house party on Feb. 17, days after Valentine’s Day.

We guess we’ll have to see what kind of tea Jordyn will spill on Jada’s upcoming show on Friday. We haven’t heard from Jordyn directly yet, other than her saying “it’s been real,” so it’ll be interesting to hear what she has to say, for sure! We probably will hear more so directly from Khloé and Kylie on the next season of Keeping Up with the Kardashians, and we can’t wait to hear their thoughts from them! For now, we’ll see what the KarJenners are really thinking via social media!

Stop Everything and Watch the Trailer for 'The OA' Part 2

Revealed! Us Weekly’s Hottest Hunk in Hollywood Is …
World News