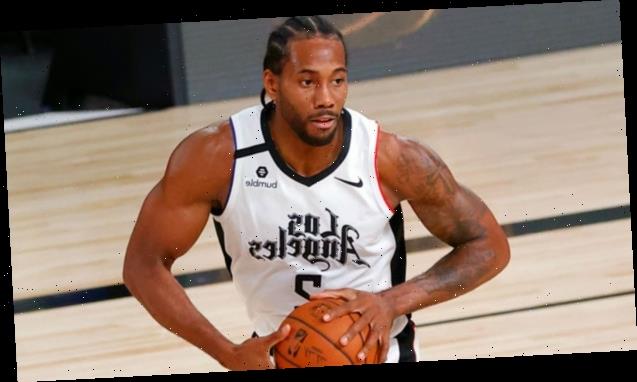 Kawhi Leonard: 5 Things To Know About LA Clippers Player January Jones Is Getting Flirty With

January Jones made headlines when she took to her Instagram story to share a video of LA Clippers player Kawhi Leonard along with a flirty caption that asked if he was her ‘future boyfriend’ and was full of heart-eyed emojis. Here are five things you should know about him.

Kawhi Leonard, 29, caught January Jones‘ eye on Aug. 6 when she posted some videos of him discussing his performance in one of his Los Angeles Clippers games and added flirty captions to them. The 42-year-old actress wrote “Future boyfriend??” along with heart-eyed emojis in one caption and “[call] me Kawhi” in the other, indicating she may have a crush on the stud. He didn’t respond to her yet but with his handsome looks and impressive athletic history, we can definitely understand why he’d appeal to her!

Here are five things you should know about Kawhi.

1. Kawhi spent his first seven years in the NBA with the San Antonio Spurs.

In his time in Texas, he won an NBA championship in 2014 and was named  the series’ Most Valuable Player. At 22, he was the youngest player since Magic Johnson to earn that accomplishment. He asked for a trade after their 2018 season, reportedly over his injury rehabilitation process with the team after the season prior, where he suffered a right quadriceps injury followed by a shoulder injury, and reportedly felt pressured by the Spurs to play when he wasn’t fully rehabilitated.

He was eventually traded to the Toronto Raptors in 2018 and led them to their first NBA Championship in franchise history. He won his second Finals MVP award before he move to L.A. and signed with the Clippers as a free agent in 2019.

2. Kawhi has a girlfriend.

One of the reasons he didn’t respond to January’s flirty posts is probably because he is already romantically involved with his longtime partner Kishele Shipley, with whom he shares two children.

Kawhi is the youngest child in his family, having four older sisters. He played high school hoops at Martin Luther King High in L.A. as a transfer in from Canyon Springs High in Moreno Valley, CA. He was later named Mr. California Basketball his senior year. In his spare time growing up he would help his dad Mike out at his car wash.

4. Kawhi still used coupons at fast food restaurants when he was a multimillionaire NBA star.

He’s an avid fan of Wingstop and freaked out when he lost his coupons in March of 2016. The fast food chain  — one of only six Twitter accounts Kawhi followed at the time– tweeted out, “He is happy to sponsor Wingstop, which sends him coupons for free wings, so he can feed his Mango Habanero addiction. This winter, after his $94 million contract kicked in, he panicked when he lost his coupons. Wingstop generously replenished his supply.”

Kawhi continued to drive his high school ride,  a “rehabbed” 1997 Chevy Tahoe he got while attending Canyon Springs High. “It runs … and it’s paid off,” the multimillionaire athlete told Sports Illustrated. in March of 2016. He does own a Porsche though.