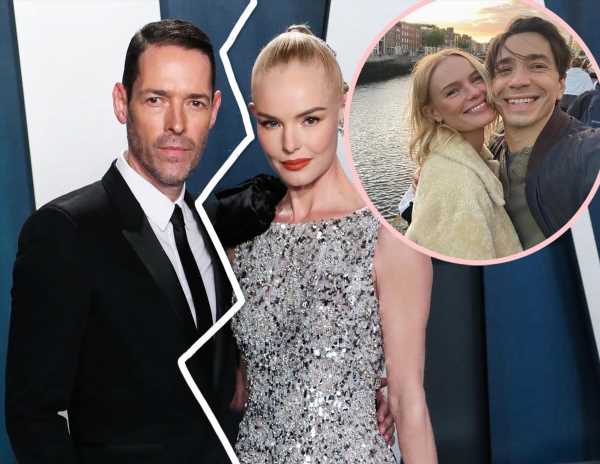 It looks like Kate Bosworth is ready to make her breakup with Michael Polish official!

According to online records obtained by TMZ, the 39-year-old actress filed for divorce on Friday in Los Angeles County Superior Court after nearly 9 years of marriage. However, it seems like the filing was nothing more than a formality. Kate actually announced back in August 2021 that the two were separating on Instagram – but noted that things would always be good between them:

“Our hearts are full, as we have never been so enamored and deeply grateful for one another as we do in this decision to separate. Together, over the last ten years, Michael and I have chosen love, every time. We hold hands as tightly today as we entangled fingers on our wedding day. Our eyes look more deeply into one another, with more courage now. In the process of letting go, we have come to acknowledge that our love will never end. The connection does not simply disappear. The love deepens, the heart expands.”

“We know the 4 am calls are coming. Songs will be exchanged to communicate only what songs can do. We laugh as we plan for our next movie together and are excited to share our latest collaboration. We believe the most epic love stories are those which transcend expectation. Our greatest honor has been to experience love like this, and to continue to marvel at the beauty of love’s evolution. What happens when we reach the end of something and realize … we are just at the beginning. This is love. And we will drink that down.”

Since the announcement, Kate has moved on with actor Justin Long. The two first sparked romance rumors in May 2021 while they worked on a movie together in Arkansas. A source later confirmed their relationship in January 2022, sharing that the couple has been together for a while:

“They’ve been dating for a few months now. They secretly have been on a few getaways together. They both love to travel.”

The insider added that while the pair are “not hiding the fact that they’re together,” they are “just staying low-key and private about their relationship.”

Things have become pretty serious between them! So much so, in fact, Justin admitted to Chelsea Handler on her podcast that he’s “never had anything like this before … I’ve never experienced this. So, I want to protect and keep it, you know?” He even told Nick Viall that he found “the one,” saying:

“I had gotten to a place where I was comfortable with myself. I didn’t know it at the time, but I was ready for the one. And the one, I met. I found.”

Meanwhile, Kate recently expressed her love for the Dodgeball star in a birthday tribute, gushing:

“You were born today and the world lit up brighter than it had known and years later you met a girl who’s life was disassembled / rearranged but you were patient and with time she fell in love now she has a glow (one that was forgotten long ago) she is so grateful *more than you’ll ever know Happy Birthday @justinlong you make me smile so big my face hurts xx Thank you for creating peace in my heart since the day we met.”

So it looks like Kate wants to officially end that chapter in her life with Michael in order to continue her sweet romance with Justin. Fortunately for them, it seems like divorce won’t be as complicated since they do not have any children together and split so amicably last year.