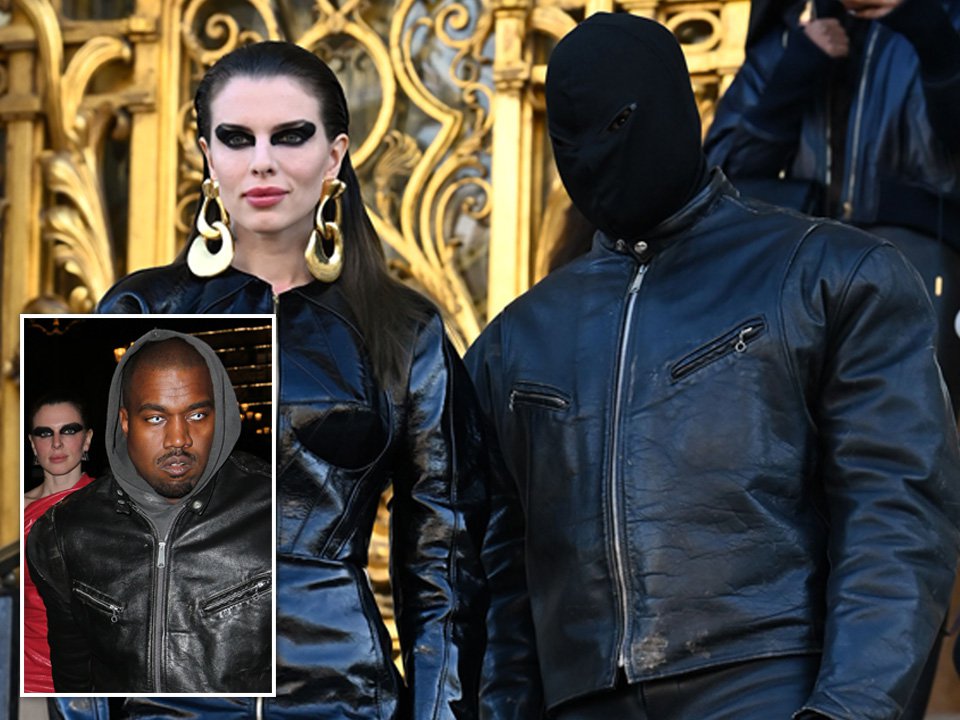 Kanye West and his new partner Julia Fox have continued to prove they are anything but shy and retiring as they bounce around Paris Fashion Week in their typical head-turning looks.

Rapper Kanye and actress Julia, whose whirlwind romance has kept us very busy since the start of January, made sure all eyes were on them on Sunday evening while stepping out for dinner in Paris.

Kanye, of course, made sure he stood out like a sore thumb as he rocked some pretty freaky white contact lenses for their dinner date, his face wrapped in a charcoal scarf.

Kanye, 44, jetted to the French capital with his new lady Julia, 31, to attend Paris Men’s Fashion Week and making their burgeoning relationship official, and they kick-started proceedings by heading to the Kenzo show.

And, of course, as has become this new couple’s ‘thing’, they wore matching outfits with complementary black leather ensembles.

We can’t help but ignore Kanye’s massive leather boots, either…

The loved-up pair’s latest outing came after they were spotted packing on the PDA in Miami on Saturday, where their romance began to blossom on New Year’s Eve.

When going public about their relationship in an essay in Interview Magazine, the actress revealed the couple had an ‘instant connection’ and she revealed that ‘his energy is so fun to be around.’

In the essay, she wrote: ‘After dinner Ye had a surprise for me. I mean, I’m still in shock. Ye had an entire hotel suite full of clothes. It was every girl’s dream come true.’

Kanye’s new romance came after his wife Kim Kardashian filed for divorce from him February 2021, and shortly after Kim was said to be dating Pete Davidson, 28.

It was recently reported that Kim hired an ‘all-new security team’ amid her bitter split from the Gold Digger rapper.

The Keeping Up With the Kardashians star, 41, filed for divorce from the music star after they’d been married for six years.

Speaking to the Sun, an insider revealed how Kanye was ‘never allowed free access to their home after their break-up, something that was ‘agreed upon verbally’.

Speaking to news outlet, they said: ‘There is no way that Kim is going to let Kanye just roam back into the house – and never has since the day he left.’

‘She’s hired a new security team – so there was no one with any previous connection to Kanye.

‘She does not want to be drawn into any battle with him – but she’s had enough now. The rules are clear, and they agreed them at the start. I think she’s really worried and feels under attack.’

The rapper reportedly also took aim at SNL comic Pete in his most recent song, Eazy, released in collaboration with The Game.

In the song, he rapped: ‘Rich a** kids, this ain’t yo mama house. Climb on your brother’s shoulders, get that Top Ramen out.’

Mailbag: Should the Pac-12, Big Ten and ACC form their own postseason?