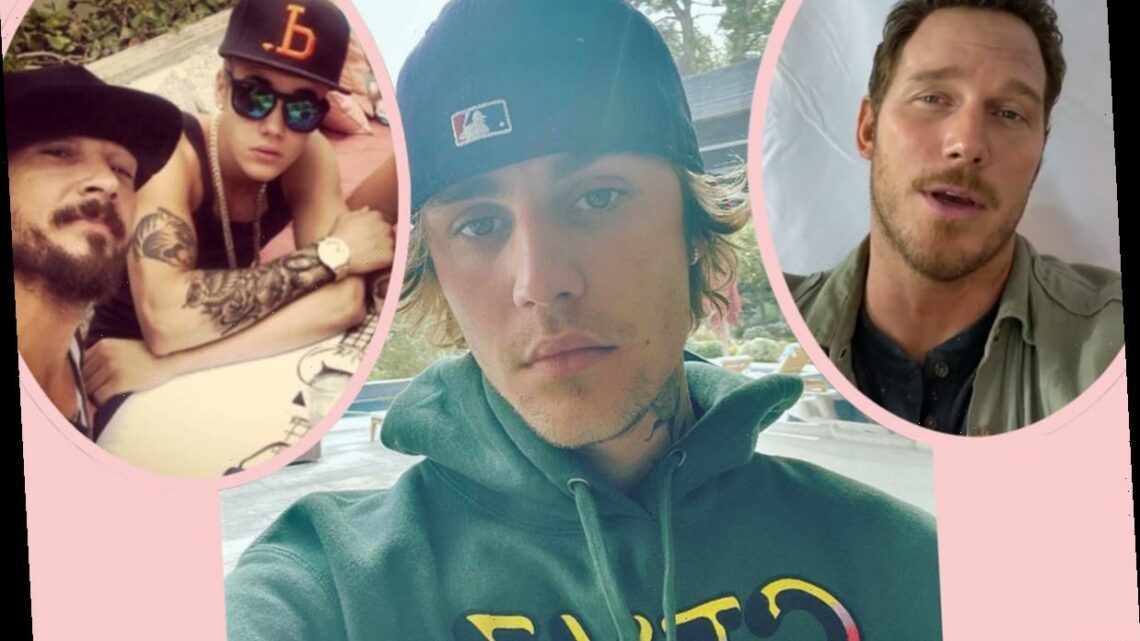 Justin Bieber Officially Cuts Ties With Hillsong Church – But Did He Really Go That Far??

Justin Bieber has finally officially declared he is no longer in any way affiliated with Hillsong, the church he helped to popularize, especially among the Los Angeles celebrity community.

The Yummy singer first took to his Instagram Stories on Monday to respond to a report from last week that he was studying to be a minister at Hillsong — something which would be especially disturbing given all the allegations which have just come out about the church.

In case you aren’t up to speed, Justin’s personal spiritual adviser Carl Lentz, a pastor at Hillsong, was fired for “moral failures” which turned out to be cheating on his wife — possibly quite a lot as more stories came out.

After that the institution itself was described by former members as “a breeding ground for unchecked abuse” by authority figures and even as a “cult” which operated on unpaid labor and used extortion on its members.

He posted a pic of the headline along with the caption:

“I’m not studying to be a minister or anything even close to that. Have no desire for that, this is fake news.”

UGH, we hate that that phrase has caught on… 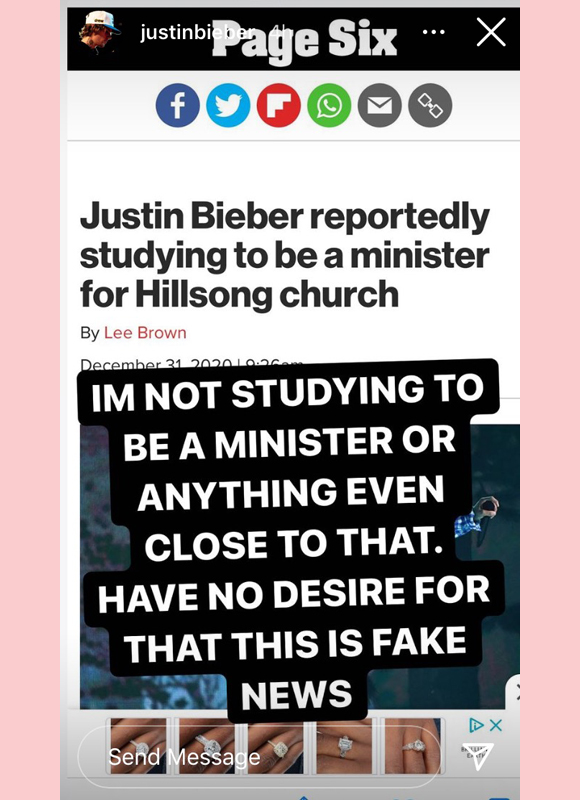 But while he was at it, he decided debunking that rumor was not enough. Justin finally explicitly stated he is publicly renouncing his membership at Hillsong, writing:

“And BTW Hillsong is not my church. For clarity I am a part of Churchome.” 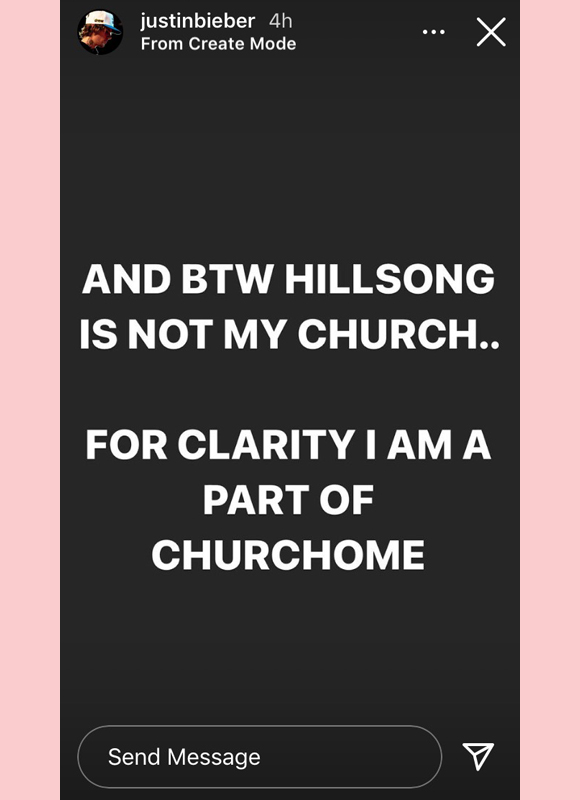 Well, that’s pretty clear. Or is it?

At first we read that as just straight up leaving for a new place of worship (or franchise of worship as many of these corporations have become). However, Churchome is actually the church Justin’s mom got him into back in 2010.

That’s right, Pattie Mallette introduced the Biebs to pastors Judah and Chelsea Smith when he was just 16 years old, because he needed “some good influences in his life” per a 2019 Marie Claire story on Churchome.

Unfortunately it was also the Smiths, a cool young married couple, that introduced him Carl Lentz and Hillsong as a place he could go when he was in NYC and to its West Coast counterpart, Zoe Church. 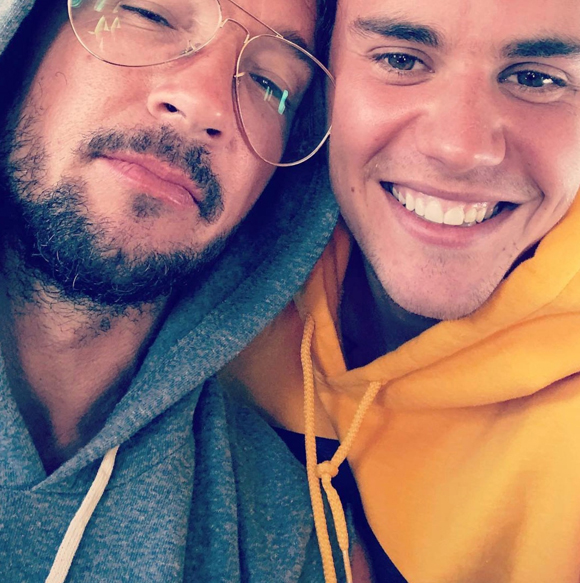 So while Churchome absolutely is not Hillsong, which still has some serious allegations to answer, it seems to function as a sort of sister association.

We should also add that Justin did not clarify any of this based on the very public homophobic leanings of Hillsong’s founder. (You can learn more about that HERE.) We don’t know Churchome’s stance on the LGBT community, but if it’s as backwards as Hillsong’s this may be more of a lateral move for Justin.

However, the singer did want to make one more thing clear — that “church is not a place”: 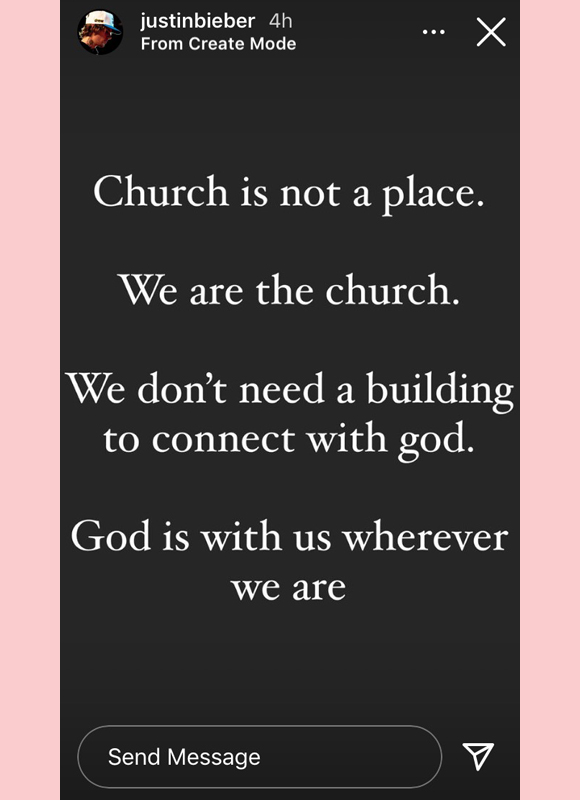 Then… why be a member of Churchome at all? And why not denounce homophobia in all those buildings you don’t need while you’re at it??

So what do YOU think, Perezcious parishioners?? Is Justin really cutting ties due to belief in a moral code? Or just dodging bad PR and throwing his former friend under the bus??