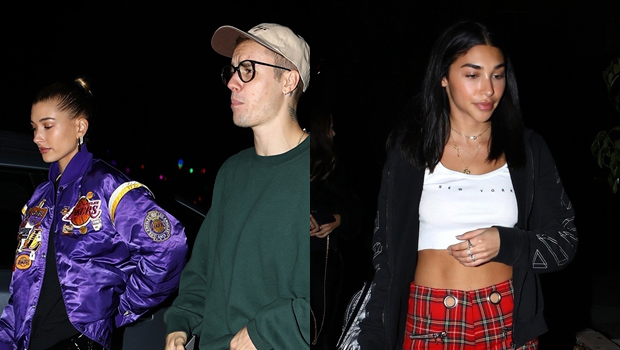 Justin Bieber and wife Hailey Baldwin went out for some sushi at Matsuhisa in Los Angeles on Dec. 7 at the same time that Justin’s ex Chantel Jeffries visited the restaurant. Did they awkwardly run into each other?

Justin Bieber, 24, and Hailey Baldwin, 22, didn’t think twice when they went to get some sushi at Matsuhisa in Los Angeles on Dec. 7 but maybe they should have since Justin’s ex Chantel Jeffries was there at the same time! Although the trio bumped into each other during the outing, there didn’t seem to be any friction between them and all was well! The hungry newlyweds wore casual yet cool attire like they usually do for their night out with Justin choosing a green sweatshirt and gray pants and Hailey wearing a bright purple L.A. Lakers coat over a black top and matching leather pants. Chantel showed off a little more skin in a white crop top under a black zip-up sweatshirt and red plaid pants.

Despite the run-in with Chantel, who Justin dated in 2014, Justin and Hailey seem to be too much in love to let their post-marital bliss get taken away. The couple surprised everyone when they secretly got married back in Sept, just two months after getting engaged. Since then, they’ve been seen proudly flaunting major PDA on numerous outings all over the world.

In addition to their private outings, Hailey and Justin reportedly posed for their first public photo shoot together for Vogue magazine. They were seen on set for the shoot, which is supposed to represent the newlyweds celebrating their love, and looked pretty amazing. Hailey wore what looked like a white wedding gown while Justin went shirtless and wore nothing but white pants.

We can’t wait to see all the new photos these two have in store for their fans. Whether they’re casually taking a stroll during an outing in NYC, or posing for professional pics, they always manage to look so happy and in love and there’s not much better than that!