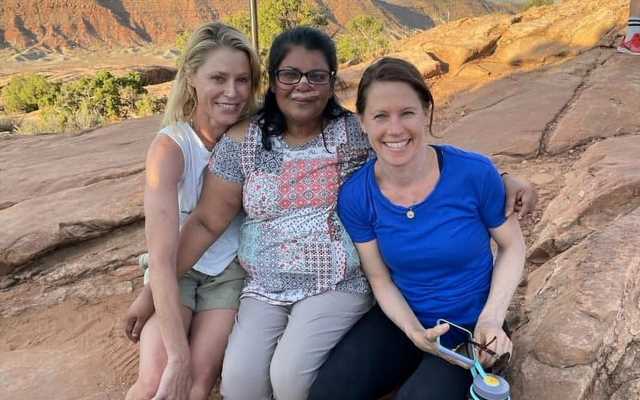 The ‘Modern Family’ actress and her sister Annie Luetkemeye help a woman who fell unconscious because of dehydration while hiking in the Arches National Park.

AceShowbiz -“Modern Family” star Julie Bowen and her sister helped rescue a woman who fainted while hiking in Utah.

Julie and her doctor sister, Annie Luetkemeyer, came to the aid of Minnie John in Arches National Park as she was struggling to walk on her new artificial knee.

In a series of Facebook posts last week (ends06Aug21), Minnie, who is diabetic, told how the actress and her medical expert sibling came to her aid after she fainted due to dehydration, explaining she had felt “light-headed” and encouraged her husband and son to continue on the trek while she rested.

“I sat there holding my head in (my) hands and waited… (My group was) called back by some people running up to them,” she wrote.

Minnie wasn’t aware she’d lost consciousness and was very confused when she came round, wondered if she “might be watching TV” because she suddenly heard “a familiar voice” asking her questions. Julie and Annie, meanwhile, reassured Minnie while they dressed her wounds and gave her an electrolyte solution to drink, to help hydate her.

“As my eyes started to focus more, (Julie) smiled and took her hair tie off and shook her hair for me to figure out (who she was),” John penned.

“Her sister the doctor asked me to guess and I told her I just hit my head, I can’t remember. She said smiling Modern Family and I said of course! I told her she was so beautiful. She introduced me to her sister Annie, the doctor, and she is of course Julie Bowen (sic)!”

Minnie had nothing but praise for the kind sisters and others who came to help after a guide spotted her fainting.

“They had everything to clean up my wounds and set me up…,” she continued. “They used my phone in my purse to call (my husband). It was a 20 minute trek to them. Some ran ahead to find them. Such wonderful men and women, selflessly giving of themselves! God bless them!”

“They were so caring and loving… They gave me electrolytes, medicines and pretzels with peanut butter.”

After returning to her hotel, Minnie was taken to hospital, where she received five stitches and was told she had fractured her nose.

She ended her post by thanking the doctors and nurses – and, of course, Julie and Annie.

“Those celebrities are awesome human beings too! Love you Julie and Annie.”

And it seems the grateful hiker was reunited with the pair after her medical treatment – because she shared snaps with the two once she was feeling better.

New mothers' lack of sleep 'can age them by seven years', study shows

Animal Kingdom Showrunner Reveals Why [Spoiler] Had to Die — Plus, Why That Hookup May Be No Big Whoop
World News