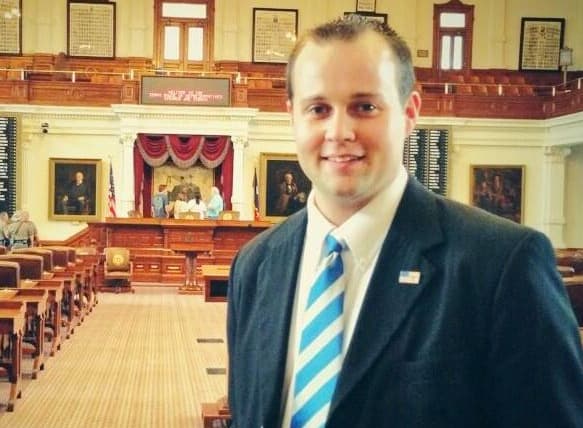 Josh Duggar was indeed the subject of a police investigation regarding sexual molestation, a new report indicates, and it allegedly involved five girls.

At least some of the victims were the 19 Kids & Counting star’s sisters.

The story of a then-teenage Josh Duggar investigated for sexual abuse first broke earlier this week, but now more disturbing details have come out.

According to TMZ, Josh was the alleged molester of five girls starting in 2002. Supposedly, his father Jim Bob turned him in, believing he had no choice.

How would even Jim Bob find out, though? Well, now it makes sense …

Josh allegedly fondled his own siblings’ genitals and breasts while the young girls were sleeping, and sometimes they were interacting with him.

In one case, the sexual molestation took place while reading a book.

It’s not clear if Josh was accused of molesting only Duggar girls or if non-family members were also involved in this alleged behavior pattern.

There was another reported incident nine months later, and according to the police report, the police were not immediately contacted in that case.

Jim Bob Duggar reportedly met with local church elders and agreed Josh should be put in a treatment program – this is according to the police report.

Josh and Anna Duggar Photos: Through the Years


Josh’s mom, Michelle Duggar, also said it wasn’t really a treatment center, and that he was sent away to work on buildings with a remodeling company.

In 2006, the Duggars were set to appear on Oprah, and before the show someone sent an email to her production company about Josh’s troubles.

It is not known who exactly tipped off Oprah’s people or why.

Oprah’s company, Harpo, forwarded the email to some sort of sexual abuse hotline, which triggered the Arkansas State police investigation of Josh.

Jim Bob sought legal representation for Josh, who declined to be interviewed by police; the statute of limitations has long since expired by this point.

As for the Duggars, one of them told the police at the time of the investigation that “this entire incident had brought the family closer to God.”

Clearly they’re all standing by him now. The Duggars are closing ranks and refraining from any sort of comment now that this story has blown up.

More to come as this scandal continues to unfold, but we will probably never watch 19 Kids and Counting online the same way ever again.

UPDATE: Josh has issued a statement in which he does not deny the allegations. Jim Bob issued his own statement. Follow the link to read …

23 Biggest Duggar Family Scandals: How Low Can They Go?!

All the Details on Jax Taylor & Brittany Cartwright's Summer Wedding!