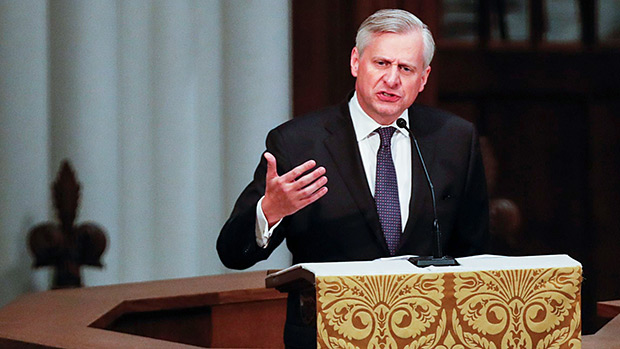 Presidential biographer Jon Meacham is set to give what’s sure to be a touching eulogy at the late George H.W. Bush’s funeral on Dec. 5. Here’s everything you need to know about him.

Jon Meacham, 49, has worked as a presidential biographer for many years now and after writing about various former political figures, including the late George H.W. Bush, who died at the age of 94 on Nov. 30, he’s set to give one of Bush’s eulogies at his funeral on Dec. 5. The writer will join other notable speakers at the service, including Bush’s son, former president George W. Bush and former Senator for Wyoming, Alan Simpson. Here are five things you should know about Jon before he’s seen by the world in what’s most likely one of the most important moments of his career.

1.) One of his first big career moves was when he joined Newsweek in 1995. After studying at the McCallie School in his hometown of Chattanooga, TN and earning a bachelor’s degree from The University of the South in 1991, he moved on as a writer for the popular news magazine and eventually became Editor-in-Chief. Since then, he has also worked as Executive Editor and Executive Vice President of Random House, a writer for The New York Times, and Time.

2.) He won a Pulitzer Prize in 2009. It was for the category of Biography or Autobiography and he won the prestigious award for his impressive biography on the 7th U.S. president, Andrew Jackson.

3.) In addition to being a writer, he has worked as a teacher. He taught History at his alma mater, the University of the South in 2014 and he works as a visiting professor of Political Science at Vanderbilt University.

4.) He gave a speech at Barbara Bush’s funeral back in Apr. Since he knew both Bush and his wife Barbara on a personal level, he was part of the touching service in a memorable way. He had been interviewing the Bush family from 2006 to 2015 so he naturally spoke out about Bush shortly after his death was announced by posting something he wrote on Dec. 1 to social media. “George Herbert Walker Bush, who died Friday night, at 94, was the last president of the Greatest Generation, a gentleman who came of age in an ever-uglier arena, the embodiment of a postwar era of consensus that, in our time, seems as remote as Agincourt. He deserves our praise, but he also repays closer historical consideration, for his life offers an object lesson in the best that politics, which is inherently imperfect, can be,” his words read.

5.) He is known for strongly disagreeing with President Donald Trump. In a gutsy 2018 article for The New York Times, Jon compared Trump to Rev. Charles Coughlin, who is a Catholic priest known for giving radio sermons that have a touch of antisemitism. He has also criticized Trump’s speaking style.

Kurt Russell's Netflix Christmas Movie Is a Family Affair — Even Goldie Hawn's in It!

Deadspin Up All Night: A Smoking Gun
World News