Home » Celebrities » John Wayne's son recalls growing up with 'The Duke': 'He knew he wasn’t going to be around when I was older'

John Wayne's son recalls growing up with 'The Duke': 'He knew he wasn’t going to be around when I was older' 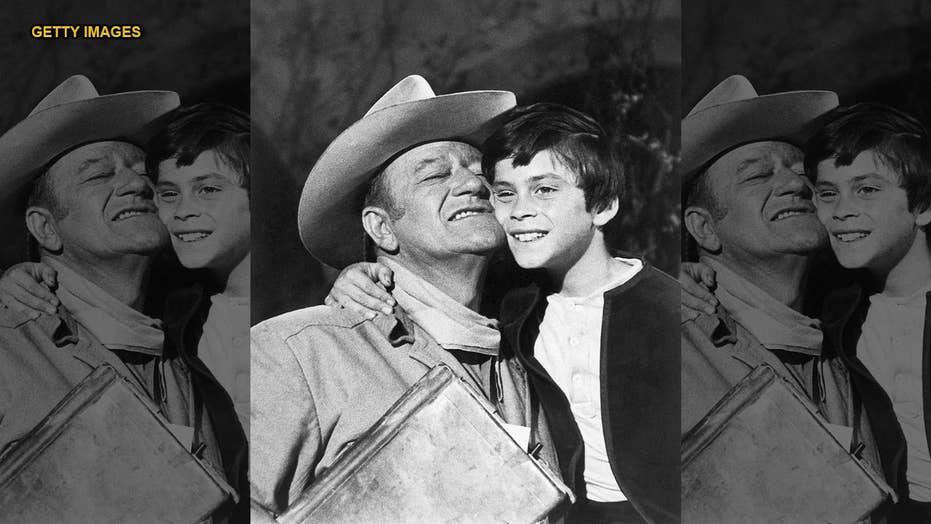 John Wayne’s son recalls growing up with ‘The Duke’

Ethan Wayne, John Wayne’s youngest son, talks about what it was like growing up with his famous father and how he’s keeping his legacy alive today.

Ethan Wayne said a day at his friend’s house made him realized his father was different.

The now-56-year-old is the youngest son of late Hollywood legend John Wayne and Peruvian actress Pilar Pallete, his third and last wife. He’s currently the president of John Wayne Enterprises and director of the John Wayne Cancer Foundation. This year, he helped release a bourbon based on the patriarch’s own recipe.

“I can remember going to a friend’s house and his mom said, ‘Hey Brian, go get the mail,’” recalled Wayne. “I went out and there were three envelopes. I remember going, ‘That’s all the mail you got? That’s weird.’ The US postal service would drag those canvas bags with lots of mail to my house. It was strange.” 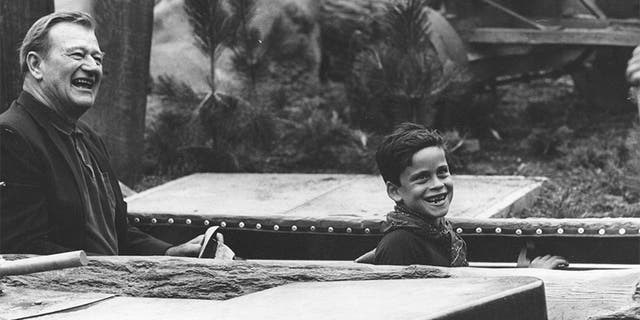 Despite Wayne having an iconic movie star for a father, he described his childhood as normal — one that involved living in then-small town Newport Beach, Calif. with other families in the same neighborhood, surrounded by oranges and strawberry farms.

There were no security or bodyguards. John answered his own door and telephone. He was an early riser who exercised alongside his son and studied his scripts before heading to work. He often spent his free time on his boat, admiring the great sea he loved. He would catch his own fish and cook it on the beach, as well as interact with locals.

John was 56 when Ethan was born — and he made sure his son never forgot to do chores around the house. 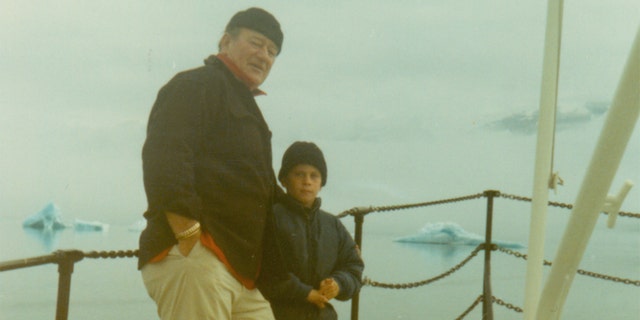 “I can’t pick up a broom to this day without thinking about him coming out and saying, ‘That’s not how you sweep, this is how you sweep!’” chuckled Wayne. “And it was with this big push broom. And he wasn’t very mechanical. He was great with his gun, he was great on a horse and he handled boats really well. But if a car got a flat tire, he’d just leave it. And I was very mechanical as a young boy for some reason. I really enjoyed taking stuff apart and putting it back together. He really didn’t get it. He didn’t like motorcycles, and I did.”

Wayne said that despite his father’s high-profile career, John, who was aware he might be gone by the time his son was a young man, was determined to be a hands-on parent. Wayne described growing up on film sets and learning about the hard work it took to bring Hollywood to life.

“He took with me on location,” Wayne explained. “I’d be homeschooled down on location in Mexico because he knew he wasn’t going to be around for me when I was older, and that he would probably lose me while I was young, teenage man. So he took me with him when I was little. And one of my jobs was to load the car with all the personal items that he wanted with him when he would make a film somewhere remote. Or if he went on his boat, the Wild Goose. 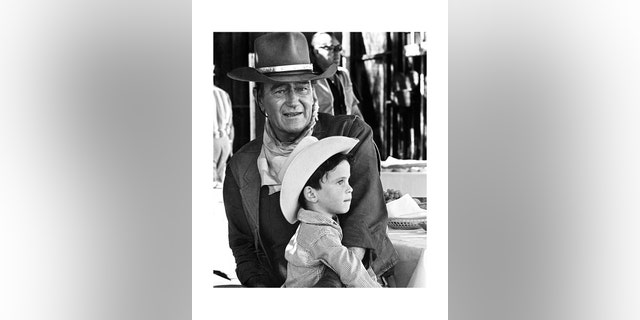 "He would take his own bourbon, and that bourbon was the heaviest thing that I would carry. Everyone wanted to have a drink with John Wayne. I would also carry his packs of candy, special food items, shoes, gloves, jackets. Definitely bags of hats.”

As an avid outdoorsman, both in front and behind the camera, he is still celebrated as one of the greatest figures of the Western genre.

“I was 10 when he was 66 years old,” said Wayne. “[And] he’s on a horse, he’s running at full speed across open country, with a herd of horses running with him… he was a bold, outgoing individual who was full of life, constantly moving forward… And nobody sits on a horse like John Wayne does.” 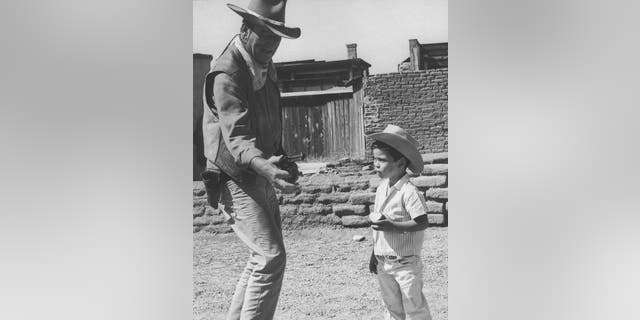 Wayne wasn’t around when the Iowa native, a former football star in high school who worked as a truck driver, fruit picker, soda jerk and ice hauler, first embarked on his career as an actor. However, Wayne said the rugged persona he embodied on screen was very much the real deal.

“I read stories [of] when he was first starting out and how he was very uncomfortable and felt awkward,” said Wayne. “He didn’t like the way he moved, so he talked to John Ford and met Wyatt Earp… He started taking pieces of these guys and putting them together into a character that became John Wayne, who was definitely part of my father. There was also fantasy. He was a heck of a gunman and a horseman, but he also certainly knew the craft of film and storytelling. We were never in a gunfight.” 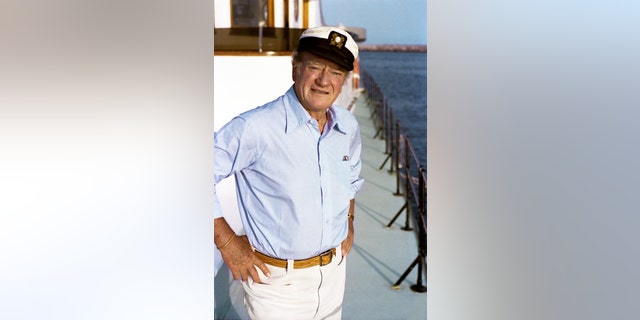 John passed away at age 72 from cancer. Wayne, who was 17 at the time of his father’s death, said he drove John to UCLA Medical Center when he wasn’t feeling well. John never came out alive.

Before his death, John stressed to his family that the doctors attempting to find a cure for cancer should never be forgotten. He left behind seven children from his marriages and more than 15 grandchildren. 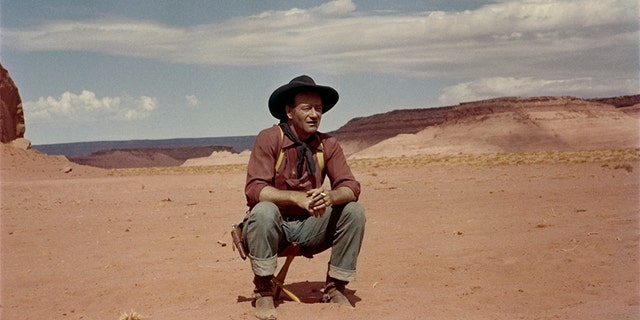 Wayne credited stuntman Gary McLarty, a friend of his father’s, for taking him under his wing and helping him cope with his grief.

“He would take me on a motorcycle ride or racing sometimes,” said Wayne. “He was [later] the stunt coordinator for ‘The Blues Brothers.’ And for some reason, he hired me. And it was in a time when I’d missed the last part of my junior year with my dad. When my father was involved in my life, I was good at school and things went well. But afterward, I wasn’t very focused on school… [Gary] gave me a little direction that I didn’t have. I’m eternally grateful to him. It probably kept me from making some mistakes.” 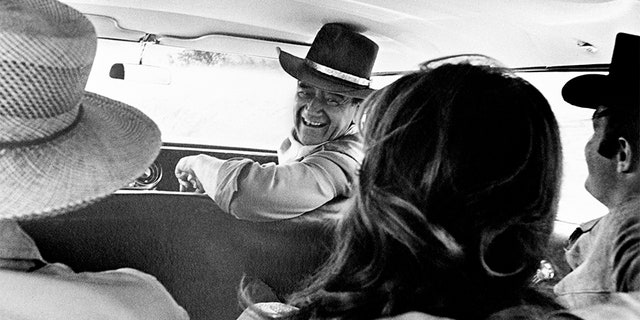 John recently lassoed in headlines for a completely different reason. In 2016, The Guardian reported California lawmakers rejected a proposal to create John Wayne Day to mark his birthday after several legislators described statements he made about racial minorities.

Wayne said he was also aware of negative statements made against his father due to him being politically conservative. He insisted John’s beliefs have been misunderstood over the years. 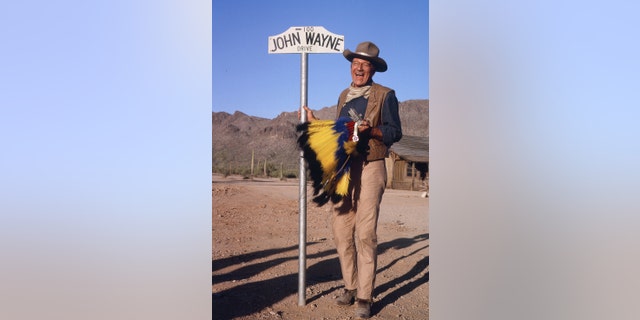 “Somebody, a Latina representative up in Sacramento, shot down a bill for John Wayne Day because he was racist. [But] he was married to three Latin women. It’s just crazy how things get blown out of proportion because he was really an open, caring, loyal, supportive man.”

Wayne hopes his father will be remembered for what he was — an artist. 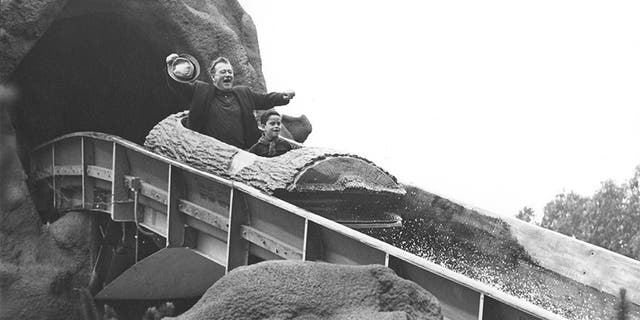 “People look at him and they think one thing or another, but he was out there representing real people,” said Wayne. “Whether they were guys who came out here and lived in the West or went to war. He played those characters. He represented them. And they liked him. They still do.”

Mother records neighbour shouting through wall of her home