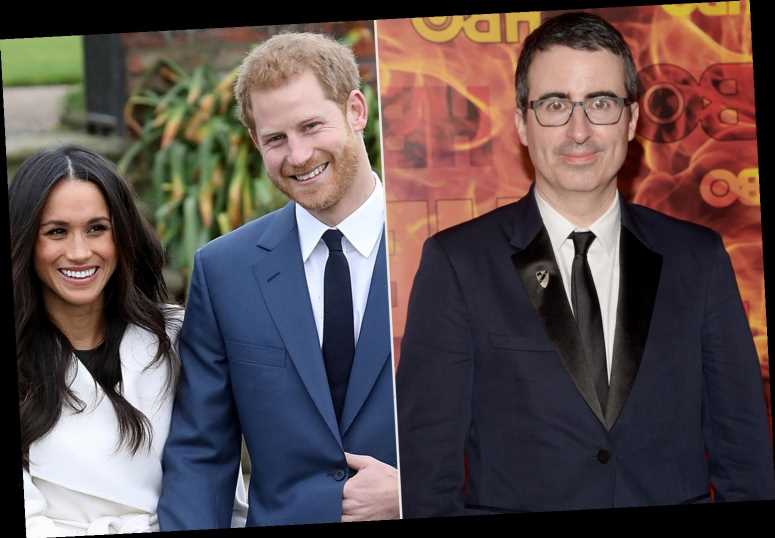 John Oliver had a prescient warning for Meghan Markle before she joined the royal family.

The Last Week Tonight host went viral on Twitter following Meghan, 39, and Prince Harry's interview with Oprah Winfrey on Sunday for comments he made to Stephen Colbert a few mont's before the couple got married in 2018.

"I would not blame [Meghan] if she pulled out of this at the last minute," Oliver, 43, told Colbert, 56, on The Late Show before Meghan and Harry's wedding. "I don't think you need to have just seen the pilot episode of The Crown to get a basic sense that she might be marrying into a family that could cause her some emotional complications."

He continued, "They're an emotionally stunted group of fundamentally flawed people doing a very silly pseudo-job. That's what she's marrying into. So I hope she likes it. It's going to be weird for her. I would not marry into the royal family. I'm a commoner. I would not be welcomed — especially after what I've just said."

Thousands of people have shared a clip of Oliver's remarks, noting how accurate his assessment was, given the revelations from Sunday's interview.

The Duchess of Sussex opened up about her family's royal exit, including the staggering toll their life at the Palace took on her mental health.

"I was ashamed to say it at the time and ashamed to have to admit it to Harry. But I knew that if I didn't say it — then I would do it," she said. "I just didn't want to be alive anymore."

Meghan said she was "ashamed" because she wanted to be strong and not put more pressure on Harry, 36.

"That takes so much courage to admit that you need help," she said.

Meghan also spoke of how she felt her own voice, as well as the voices of her loved ones, were stifled by the institution.

"I've always valued independence. I've always been outspoken, especially about women's rights, and that's the sad irony of the last four years, I've advocated for so long for women to use their voice. And then I was silent," Meghan said.

"Were you silent, or were you silenced?" asked Winfrey, 67. Meghan responded, "The latter," adding she was directed to give a "no comment" on questions directed her way once her relationship with Harry was public.

"That's my friends, my mom and dad. We did it, I did anything they told me to do," she said as she recalled thinking that she would be "protected" by the royal family.

"That was really hard to reconcile because it was only once we were married and everything started to really worsen that I came to understand that not only was I not being protected, but that they were willing to lie to protect other members of the family," Meghan said. "They weren't willing to tell the truth to protect me and my husband."

Since Meghan and Harry's revealing interview, Buckingham Palace has responded with a statement.

"The whole family is saddened to learn the full extent of how challenging the last few years have been for Harry and Meghan," reads the statement, which was released on Tuesday by Buckingham Palace on behalf of Queen Elizabeth.

"The issues raised, particularly that of race, are concerning," the statement continued. "While some recollections may vary, they are taken very seriously and will be addressed by the family privately.

"Harry, Meghan and Archie will always be much loved family members."

A Palace source stresses to PEOPLE that at the "heart of this is a family, and they should be given the opportunity to discuss the issues raised privately, as a family."

"It has been important for us to carefully consider any response before issuing," the source tells PEOPLE. "And of course releasing something today meant viewers in the U.K. had the opportunity to watch the interview, if they wished to, first."