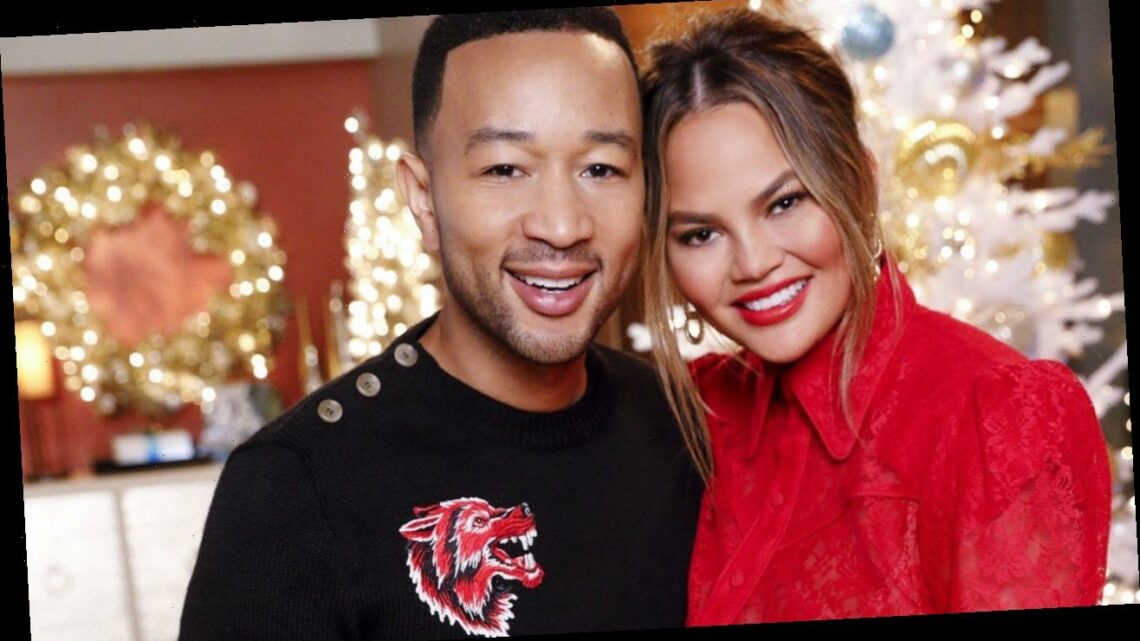 John Legend couldn’t be more grateful for all the people who have reached out to him and Chrissy Teigen following their pregnancy loss. On Sept. 30, Teigen — who had been documenting her third pregnancy — revealed that they lost the baby boy they were expecting.

Teigen took a break from social media following their heartbreaking news. When she returned late last month, she penned an emotional letter about losing baby Jack. She’s since shared a tattoo she got in honor of her late son, as well as a heartfelt moment their daughter, Luna, had after his ashes were brought home.

When asked how he and his family continue to push forward in such a positive manner after loss and the current state of the world, Legend replied, “Well, I think we have to.”

“Whenever we go through personal challenges — and I think challenges as a nation — I think we have to hold on to what makes us optimistic. What makes us hopeful, hold onto the things that bring us joy,” he explained. “And in my family, as we’ve gone through a tough year, we hold onto the fact that we have two beautiful kids that we love and are such a beautiful reflection of who we are and what we value.”

The “Bigger Love” singer also touched on the recent election, which saw Joe Biden being elected as the president of the United States. Prior to Election Day, he performed at a Philadelphia rally for Biden, as well as sang “Georgia On My Mind” as the results trickled in. He noted that while some people “didn’t get what they wanted out of the election,” it was “important for this nation to turn a page.”

“I felt like Georgia played a key role in getting us there and I wanted to sing them a song to thank them for the true, beautiful work of democracy that was encouraged by people like Stacey Abrams and other people who went out there and registered hundreds of thousands of people to vote,” he acknowledged. “That took a lot of work and it took a lot of optimism and it took a lot of faith in democracy. Faith in the people that if we put in the work to get them involved, that they would go out there and make their voices heard. And they did and it’s such a powerful story.”

Legend has also been working on his own powerful stories. His latest project, which he produced, is the diverse musical film Jingle Jangle: A Christmas Journey. It follows legendary toymaker Jeronicus Jangle (Forest Whitaker), whose fanciful inventions burst with whimsy and wonder. But when his trusted apprentice (Keegan-Michael Key) steals his most prized creation, it’s up to his equally bright and inventive granddaughter (newcomer Madalen Mills) — and a long-forgotten invention — to heal old wounds and reawaken the magic within. The movie features original songs by Legend, Philip Lawrence, Davy Nathan and “This Day,” performed by Usher and Kiana Ledé.

“It’s so exciting to have this opportunity. [Creators] David Talbert and his wife, Lyn [Sisson-Talbert], they’ve been dreaming of this film happening for 20 years. They wrote the script years ago and finally they got to a point where they were able to make it,” Legend explained, with producer Mike Jackson next to him. “They joined forces with us and with Netflix. We put together this amazing cast, great music, all the things that we needed to make this vision come to life and here it finally is.”

“With having kids who are Black and brown, growing up in a world where there’s not a lot of content that shows a positive vision of who they are and what they look like, it’s really powerful that we have this film for our young people that can be on perennial Christmas cannon,” he expressed. “That show the possibilities that we have as Black and brown people. I think is pretty beautiful and we’re excited that Get Lifted, our film company, is able to be a part of that.”

Additionally, Legend and Jackson also produced Giving Voice, the Sundance Award-winning documentary that follows the emotional journey of six students as they advance through the high-stakes August Wilson Monologue Competition.

“Giving Voice, we had the pleasure of being producers on August Wilson’s Jitney on Broadway, which won the Tony for Best Play Revival,” Jackson said. “We got to know his wife and just really form a strong relationship with his family…For us having the opportunity to extend our relationship with the Wilson family, but also be a part of something else like Jangle, which allows you to dream the impossible, allows you to break down barriers and look at yourself in the mirror and know that you are enough and that you can do it [is great]. And I think that’s what Giving Voice does. It just serves as an incredible source of inspiration.”

Legend added, “It’s kind of magical that these two films are coming out on Netflix around the same time, which are very different tonally but the thread that runs through both of them is that you can dream big, you can do things that you thought were impossible. And I think that’s a really magical thing for us to be able to put out there during this dark year that we’ve had.”

Jingle Jangle: A Christmas Journey is arrives in theaters and on Netflix Nov. 13. Giving Voice is available on Netflix Dec. 11.