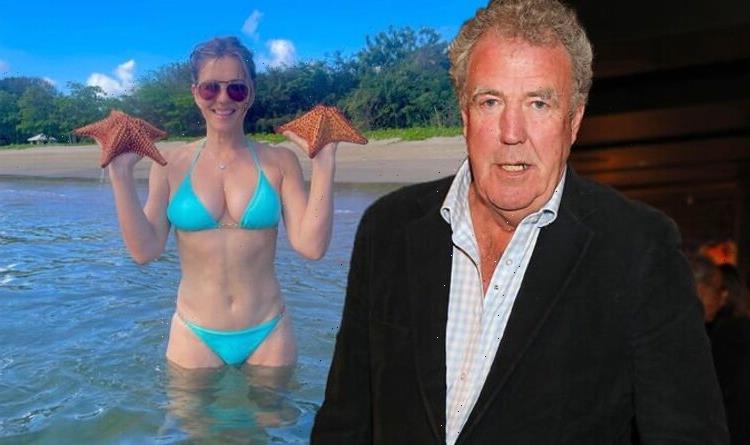 Jeremy Clarkson asks why council should be serving vegan food

Jeremy Clarkson, 62, defended Liz Hurley, 56, after she received backlash on social media for posing with two “delicate” starfish. The Clarkson’s Farm star said accusations launched by some that Liz was killing the animals by picking them up were simply “not true”, and suggested they aim their frustrations at former president Barack Obama, 60, instead.

In his latest opinion column Jeremy wrote: “Liz Hurley posed this week in a bikini while carrying a couple of starfish and immediately everyone in the increasingly mad world of social media went mental, saying that if you pick up a starfish, it will die in screaming agony.

“This was then picked up by the newspapers, who basically said that Liz is a star f***er.”

“There’s one small problem with the story though,” he continued. “It’s not true. Starfish don’t die if you pick them up.”

“There’s even a fish-fondling farm in the woke world of Northern California where visiting children, after they’ve toured the non-gender-specific lavatories, are invited to do just that.”

Earlier this week, model and socialite Liz posted a picture of herself with the creatures, prompting some angry Instagram users to claim the creatures would have been suffocating out of water, and die if they are touched by humans.

Sharing some bikini pics with her 2.3 million followers, Liz wrote: “Found these magnificent starfish, alive but stranded, on the beach – they’re now happily back at the bottom of the sea”.

The Austin Powers actress made it clear she put the starfish back in the sea where they belong.

She even explained how she’d saved their lives, because they had been stranded on the sand, doomed to suffocate out of water.

But some of her followers were still not impressed, and blasted the star for posing for a photo rather than making haste.

In his article, Jeremy went on to argue that the former President Obama should face backlash instead of Liz.

The former Top Gear presenter wrote: “If you want to pick on a celebrity who has been photographed while handling an animal of some sort, why not have a go at Barack Obama?

“He was snapped cuddling a koala. And if you do that, it will immediately catch chlamydia,” he added in his article for The Sun.

This was perhaps a joke in reference to the chlamydia epidemic amongst Australia’s koalas, which has been documented in the scientific community for many years.

Meanwhile, Liz faced a number of targeted messages on Instagram for her interaction with the aforementioned starfish.

One user, “Alexiazn”, wrote: “They are beautiful, too bad they died after you took that photo.

“People must know that starfish die when you take them out of the water!”

“Beyronce” agreed: “The caption is definitely a lie. the starfish wouldn’t survive on the beach”.

Joanna Colcough added: “Poor starfish. Let’s hope they were put back in the sea.”

“They are extremely delicate and most likely won’t survive once you take them out of the sea and manipulate them,” wrote another disgruntled user, according to the Daily Mail.

Express.co.uk has contacted a representative for Liz for comment.

My breast reconstruction after my mastectomy looked like a 'plasticine boob', says Countryfile's Julia Bradbury