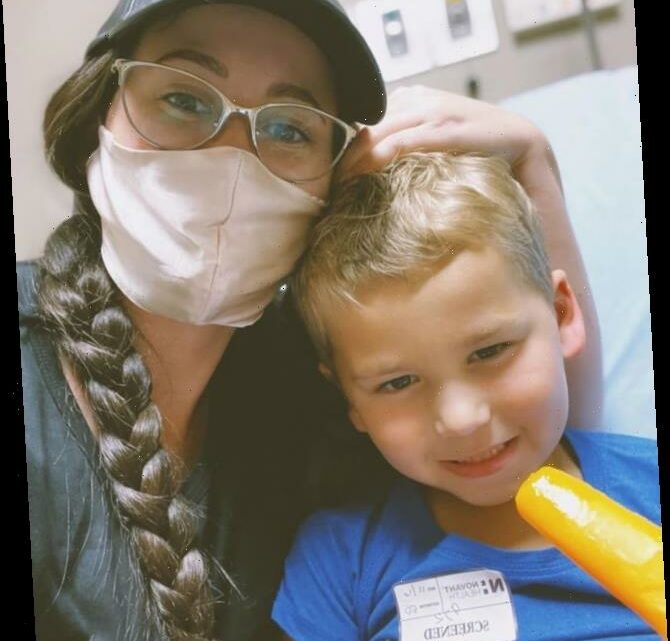 Jenelle Evans is the worst mother ever featured on a reality television show, and she must be in the running for the title of worst mother in America.

If you take out the ones who are in prison for mass murder or what have you, Jenelle is easily a top contender.

She’s exposed her children to just about every kind of abuse imaginable, and she acts like it’s some huge triumph when David Eason stops beating one of her kids.

Not only has she enabled David — even after such appalling actions as murdering the family dog in front of her children — she’s also committed countless atrocities of her own.

In addition to the many instances in which she’s been aggressively abusive toward her friends and family members, she’s also been negligent in her parenting duties more times than we can count.

In many cases, this lax attitude has put her children in harm’s way.

Case in point, Jenelle and David’s recent decision to take their 3-year-old daughter out to a buffet restaurant at the height of the Covid-19 pandemic.

As many critics pointed out, a buffet restaurant is about the last place you want to be during a pandemic, and Jenelle and David’s decision to document the occasion on social media makes it seem as though they’re proud of their decision to put their daughter at risk.

“It blows my mind how some states people are barely allowed to leave their house and in others they are acting like corona doesn’t exist,” another added.

“We have already been through this. None of the cast care about COVID. And it’s not a big shock, they’re all dumb as bricks,” a third chimed in.

Jenelle has been criticized many times for taking her children out in public unnecessarily, so she knew what sort of response she would receive when Eason posted Ensley’s mask-less pic on his Instagram Story.

“[Ensley] is under five so no she’s not going to wear a mask,” she argued in the past.

“If you’re a parent and don’t understand why this is in place, you should research.”

It’s true that children under a certain age should not wear masks because of potential impairments to their breathing.

But for most parents, the solution to that conundrum is to keep their kids out of indoor public places as much as possible, not to throw caution to the wind and flip the bird at anyone who points out that it’s not safe to be in public without a mask on.

And as much as she might like to hide behind the age argument when people point out that she’s putting her kids at risk, Jenelle clearly doesn’t believe it’s necessary for anyone to wear a mask.

Jenelle has taken mask-less trips to Wal-Mart while case numbers in her state were spiking, and she gleefully documented these occasions on Instagram.

Of course, this is just like the debate over Jenelle’s racism that took place over the summer.

She loves to flaunt her deplorable beliefs one minute, but then she runs and hides from the slightest pushback the next.

For some, this is a sign that David simply tells Jenelle what to believe, and she complies without questioning his logic.

Jenelle Evans: MTV Never Fired Me, But They Should Have Fired Chelsea Houska!Start Gallery

She then loses her nerve when critics on social media ask her to defend these beliefs, as she doesn’t really understand them herself.

Some people cite this set of circumstances as an argument that Jenelle isn’t truly an abusive bigot — as she so often appears to be — she’s just someone who’s following orders.

That may be true, but we’re sure the difference is immaterial to her traumatized children.

And besides, some of the worst atrocities in human history were committed by people who were just following orders.

Magical images show it was still love, love we do for the Fab Four

What to Watch on TV This Week: ‘Wonder Woman 1984’ and ‘Bridgerton’
World News