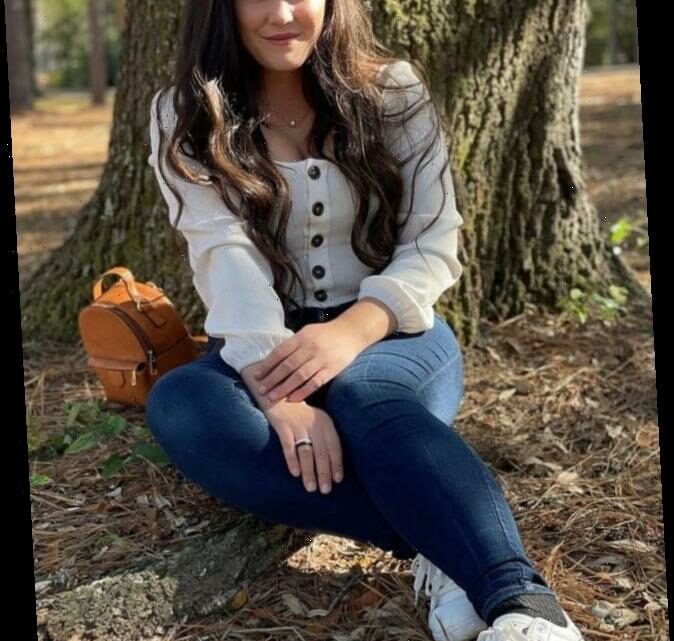 Jenelle Evans is always prattling on about how much she loves TikTok and hates every other social media platform.

She says it’s because the commenters on Instagram and Twitter are so mean, while folks on TikTok are more friendly and accapting.

We think it’s because people on TikTok are younger and don’t really know who Jenelle is, so they’re unaware of her long history of violence, abuse, and bigotry.

Anyway, Ms. Evans is as bored and unemployed as ever these days, so while she claims to hate the other platforms, she still posts on them.

And her latest pics probably served to remind her why she’s no great fan of the ‘Gram.

They look simple enough at first — just a couple pics of Jenelle sitting on the ground and leaning against the base of a tree.

Maybe not the most advisable pose when you’re rocking a white top, but hey — she’s the one who’s gotta do the laundry.

Is this one of those cases where the most psychotic person you know overcompensates by posting meaningless, pseudo-spiritual hippie crap?

Anyway, fans were less interested in Jenelle’s corny caption than in the pics themselves, which they claim are badly photoshopped.

As evidence, they point to different parts of the pics, where the retouching is most obvious.

“The Photoshop on her boob is so obvious,” said one commenter.

“Oh why the Photoshop, I thought she loved her curves? Peak the backpack if you don’t see it, it’s warping into her,” another pointed out.

“The Photoshop … she doesn’t look like that,” a third chimed in.

It’s certainly true that this doesn’t look like any version of Jenelle we’ve seen before — and the girl has gone through a lot of different looks over the years.

Maybe she’s just creatively using filters and angles and, like, ancient rituals involving the blood of a dozen virgins, or something?

This is what we get for trying to defend Jenelle!

Anyway, Evans also posted another pic in which she’s seen posing by the same tree, this time with daughter Ensley.

“Having a #MiniMe is all fun and games until she starts acting like you,” Jenelle captioned the pic.

Evans has been carefully curating the comments on this pic, which is probably a good thing, as insulting a child is never cool.

That said, neither is the vast majority of Jenelle’s behavior.

Jenelle might take pride in Ensley acting just like her, but we’re sort of hoping this girl leaves the Swamp in rearview and heads to Harvard someday.

Sure beats marrying a guy who shoots the family dog for fun, and spending your days sitting around, brainstorming ways to pay the bills without getting a job.

In case it’s not clear, we wish all the best for all of Jenelle and David’s many offspring.

But if those kids succeed, it will be despite all the drama and insanity and abuse they witnessed during their childhoods.

Definitely not because of it.

Colin Kaepernick is still working hard to return to the NFL, training 5 days a week, and throwing bombs to Eric Reid
World News