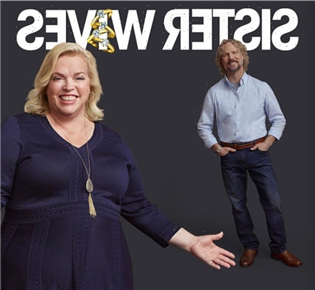 Janelle Brown’s House Goes on Sale. Is the Sister Wives Star Moving Away?

Have we been duped, Sister Wives fans?

Over the past several weeks, TLC viewers have been wondering about the future of cast members Meri Brown and Christine Brown.

Both of these spouses have expressed extreme displeasure of late when it comes to their marriage, with Christine coming right out and saying on the Sister Wives finale that she’s done with Kody Brown.

She just can’t do it anymore.

However, Christine is still in Arizona.

It doesn’t appear she’s going anywhere, despite all the issues she rightfully has with her selfish spiritual husband.

In the face of all this chatter about Christine and Meri (whose spark with Kody was extinguished years ago, both sides have basically confessed), our attention must now turn to the status of Janelle Brown.

Because her home is apparently for sale!

According to The Sun, the five-bedroom ranch house in which Janelle has lived for three years has gone on the market for $699,000.

Her other three kids have moved out.

To be clear, however, Janelle has simply been renting this house, meaning the owner has decided to see if he/she can find a seller and therefore determine whether or not he/she wants to move on from the property.

Janelle does not have any say in the future of the house itself.

However, her future is very much impacted by this move because she won’t be able to stay in the home if it gets sold.

And here is where Kody’s ineptitude comes into play…

The idea at the time was to build his dream mansion, perhaps even one that could include all four spouses under one roof.

No construction of any kind has gotten underway at Coyote Pass, though, causing serious financial problems for the Browns… as well as potentially serious practical problems for Janelle.

Where is she gonna live if her rental gets bought up?!?

Back when episodes of Sister Wives were still airing on TLC in April, Janelle spoke out about her relationship with Kody.

She tried to set the record straight about what came across like a very one-sided romantic arrangement.

After a social media user claimed she had to “force” her husband to say “I love you” on the show, Janelle fired back, defending the father of her six kids as follows:

“He says it to me more than I say it to him lol.

“But after decades, we have been married, I can communicate to him what I need at any given moment.”

Around this same time, Janelle also addressed what life was like within a plural family, Tweeting:

“I think since we have been public, I personally haven’t felt awkward about being a polygamous in a monogamous world.

“When we were trying to stay secret it was awkward.”

It will also be awkward if Janelle ends up on the street if/when her home gets sold.

We doubt Kody would care much, however.

The Best Makeup Looks To Wear With A Yellow Outfit