Home » Celebrities » Jana Duggar: Is Jim Bob Refusing to Let Her Get Married? 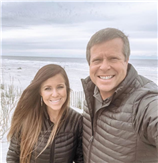 Jana Duggar: Is Jim Bob Refusing to Let Her Get Married?

For almost as long as Jana Duggar has been in the spotlight, fans have been calling for her to get married and start a family of her own.

Obviously, that’s not the most enlightened attitude to take toward a female celebrity — or any woman, for that matter — but Jana was raised in a family and a culture that prioritized procreation above all things.

(Her parents literally built their entire careers around their love of breeding.)

So many fans assumed that Jana’s ultimate goal was to follow in her parents’ and sisters’ footsteps and birth a sizable brood of her own.

But these days, it’s starting to look as though leaving the nest and forging a future of her own just might not be in the cards for Jana.

Her road to freedom seemed to be taking shape earlier this year, when Jana entered a courtship with Stephen Wissmann, a Nebraska-based businessman, musician, and amateut pilot.

Now, however, it seems that Jana and Stephen appear to have broken up, and some fans fear that that might have been her best and last opportunity to get out from under the thumb of her overbearing father.

Duggar women aren’t permitted to move out until they’re married, and Jana’s role as her siblings’ full-time babysitter has earned her the nickname “the Cinderella Duggar.

All of this raises some interesting questions about Jana’s continued bachelorette status.

Was it Jana’s decision to remain at home into her thirties — or is she merely obeying Jim Bob’s will?

That topic came up for discussion this week in the always-entertaining r/duggarsnark subreddit.

“She had the idea of an arranged marriage held over her for years (if you’re good and godly we’ll get you a husband!) but it all turned out to be a lie,” one redditor wrote.

“Her entire purpose was to raise her siblings, and then she was supposed be her parents retirement plan and caregiver in their old age. It got me thinking – what if that’s the real reason for Jana’s endless season of singleness?”

It’s an interesting theory, and it would certainly explain a lot.

In every other area of her life, Jana dutifully carries out her parents’ orders to a tee.

And other than evangelical Christianity, frenzied procreation is the thing that Jim Bob and Michelle prioritize above all else.

Why would the most loyal of their daughters defy her parents on this one issue that’s so vitally important to them?

The issue is further complicated by the fact that Jeremiah Duggar is courting Hannah Wissman, Stephen’s sister.

So obviously, the Wissmann family lived up to Jim Bob’s sky high expectations and received his rare seal of approval.

Why then, did Jana and Stephen go their separate ways so abruptly?

Fans have long theorized that the split had something to do with Josh Duggar’s arrest on child pornography charges.

The main theory was that the Wissmann family sought to distance themselves from the Duggars amid that shocking scandal.

But maybe the arrest affected Jana’s relationship in a different way.

Perhaps Jim Bob convinced Jana that the family needs her at home during these trying times.

It seems almost unfathomable that any father would so cruelly exert his will over his daughter — but as he’s demonstrated many times, Jim Bob is not yout typical father.