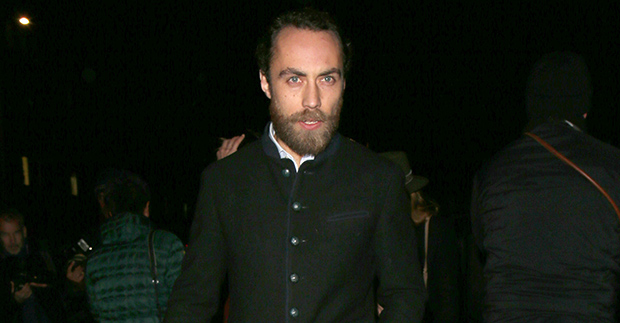 Kate Middleton’s younger brother, James, has been making headlines lately after he opened up about his struggles with depression in an honest editorial to help others. Here are five things about the courageous businessman.

Kate Middleton‘s brother, James Middleton, 31, recently gained a lot of exposure when he bravely revealed his secret battle with depression in a touching editorial piece for Daily Mail. The hunky English businessman called his struggles “a cancer of the mind” and described what he went through before seeking treatment for the devastating disorder a year ago. “During the day I’d drag myself up and go to work, then just stare with glazed eyes at my computer screen, willing the hours to tick by so I could drive home again,” he wrote in the op-ed. “Debilitating inertia gripped me. I couldn’t respond to the simplest message so I didn’t open my emails. I couldn’t communicate, even with those I loved best: my family and close friends.” James went on to explain that even though he’s grateful for his fortunate life, it didn’t stop his brain from finding reasons to be down. “I know I’m richly blessed and live a privileged life,” he continued. “But it did not make me immune to depression. It is tricky to describe the condition. It is not merely sadness. It is an illness, a cancer of the mind.”

James’ captivating piece went on to get even darker and he even shockingly revealed that there was time when he contemplated suicide. Now that he’s gotten the help he needs, he works hard everyday to maintain a positive attitude and his better understanding of himself helps him know how to help keep his depression at bay. Here are five things you should know about James as he continues making a difference in the world of deadly depression.

2.) He started a number of businesses. Although James initially went to school to study Environmental Resources Management, he left after on year and opened his own cake-making business in which he baked cakes and sold baking kits to make it easier for others to bake all kinds of delicious cakes at home. The impressive business won Smarta 100 and Haines Watts Young Entrepreneur awards and one of its most memorable gigs was when the business participated in a Hello Magazine photo shoot. 21 cakes that featured various covers of the magazine, including a photo of Princess Diana, impressed many and gave the business positive exposure. James also opened Boomf, a company that makes marshmallows with edible pictures on them.

3.) In addition to depression, he struggles with dyslexia and Attention Deficit Disorder (ADD). James describes being “severely dyslexic” as a child in the Daily Mail op-ed and he also reveals that he was diagnosed with ADD last year. Although both disorders can be challenging, the Duchess of Cambridge’s sibling says they helped him better know himself and he even sees his ADD as a “gift”. “It accounts for my creativity and emotional intensity,” he wrote. “It means that I come up with fantastic, original ideas — but it also explains why I have had difficulties with the minutiae of running a business.”

“I’m starting to impose order on my life,” he continued, about how he handles his ADD. “I write a list of ten things I want to do each day. If I know I really need to concentrate on a task, I might take medication prescribed by my doctor to control my symptoms.”

4.) He has credited his dogs for helping him through his struggles. “I recognize, too, the role my dogs — Ella, Inca, Luna, Zulu and Mabel — have played in my recovery,” he wrote in the op-ed. “Ella, particularly, has been my constant companion for ten years and she’s been with me to all my therapy sessions. In her own particular way, she has kept me going.”

5.) One of his first experiences with international exposure was at Kate and Prince William’s wedding. James had the honor of reading the lesson at the 2011 televised ceremony at Westminster Abbey in London. The traditional reading was from the New Revised Standard Version of the Bible and consisted of the Romans chapter 12, verses 1–2 and 9–18.