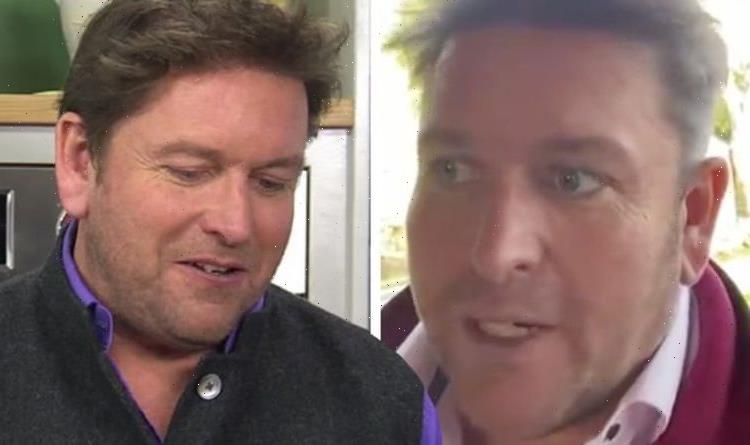 James Martin throws his sieve onto the floor

James Martin, 49, admitted he has quite a morbid bedside ornament, but it’s one that means everything to him. Alongside one of his many culinary awards, he revealed he keeps his dog’s ashes in box that he taps every night before he goes to sleep, a mantra he described as “pretty special”.

When I was about 26/27 I had a little dog called Fudge, who came to be a monumental pain the a**e

Chatting to Christoper Biggins on his podcast Show and Tell, the Saturday Morning chef told the tale behind his decision to place his old spaniel Fudge’s ashes in that specific place.

“When I was growing up, I grew up on a farm and I remember my first dog and the stuff that you go through when that dog passes away.

“It’s a member of the family and those people who haven’t got any family, [to them] it might be a direct member of their family.”

He recalled first getting Fudge and how he soon became a “monumental pain in the a**e”.

“When I was about 26/27 I had a little dog called Fudge, who came to be a monumental pain the a**e,” James laughed.

“But he as my bestest friend and at the age of three months, he nearly died.

“I took him to the vets and they turned around and said, ‘In the morning he might not be here, so just hold him.’

“So, I fell asleep on the vet’s sofa and woke up in the morning and this little spaniel, who was 12 months old licked my face and we had this bond ever since!”

While James was over the moon Fudge was OK, he joked that things soon went down a very expensive hill.

“He was allergic to everything, including b***dy grass!” the chef chuckled as Biggins cackled with laughter.

“He would also never ever go upstairs, he’d just growl at you.”

But despite his flaws, James was devastated when his little pain passed away.

“When he passed away, I had his ashes put in a box and that box is by the side of my bed, next to this award.’

“And every night I tap the box and look at this [the award] and it’s pretty special.”

James also recently shrugged off viewer complaints about having his current dog in the kitchen with him while he filmed his ITV show, explaining that the pooch lives there and he won’t be taking any moaning seriously.

Show and Tell with Christopher Biggins is available to listen to now on various platforms.