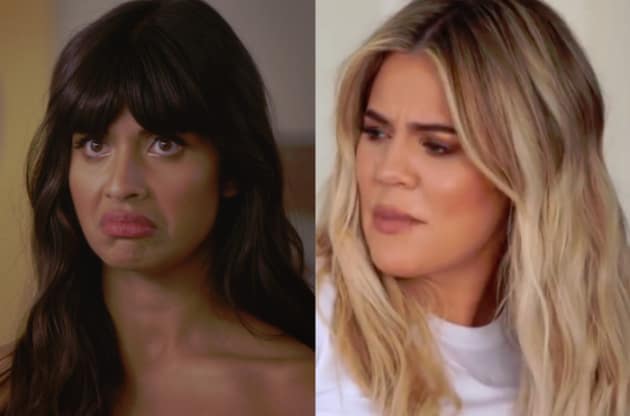 This isn’t the first time that The Good Place actress Jameela Jamil has taken aim at Khloe Kardashian.

But as long as Khloe keeps pushing weight-loss products on her followers without giving them all of the facts, Jameela will keep calling her out.

Jameela is taking it upon herself to warn Khloe’s followers that what she’s selling might make them sick in the grossest way.

“Loving how my tummy looks right now you guys!” Khloe gushes alongside the photo you can see above.

“I brought @flattummyco’s meal replacement shakes into my routine about 2 weeks ago,” she claims. “And the progress is undeniable.”

“P.S the shakes are 20% off today and you can get Flat Tummy Tea at a really good deal too,” she writes.

Khloe then instructs her legions of impressionable followers to “Go check it out!”

“If you’re too irresponsible to: a) own up to the fact that you have a personal trainer, nutritionist, probable chef, and a surgeon,” Jameela begins.

She continues: “to achieve your aesthetic rather than this laxative product.”

“And b) tell them the side effects of this NON-FDA approved product, that most doctors are saying aren’t healthy,” Jameela notes.

“Possible Flat Tummy Tea side effects are cramping, stomach pains, diarrhea and dehydration,” she writes. “Then I guess I have to”

And she has more to say.

“It’s incredibly awful that this industry bullied you until you became this fixated on your appearance,” Jameela notes.

Khloe rose to superfame in the late 2000s, when “mean humor” and body shaming were still in vogue on social media.

Kim Kardashian radiated sex appeal to many people, and some vicious trolls accused Khloe of being the “ugly duckling” of the family.

That was before her dramatic body makeover and rebranding.

“But now,” she continues. “Please don’t put that back into the world, and hurt other girls, the way you have been hurt.”

“You’re a smart woman,” Jameela concludes. “Be smarter than this.”

Jameela Jamil is famous for her radiant beauty and has risen to new heights with her starring role on the hit comedy, The Good Place.

Her quest to fill people with body positivity has helped to define her when she is off screen.

Jameela has spoken about her stretch marks, about her past struggles with being dangerously underweight, and attaining a healthier body image.

In fact, she is so well known for her aggressive body positivity that it is sometimes a joke.

My favorite Reductress headline of all time is: “Help! I Said I Hate My Thighs and Now Jameela Jamil Is Hunting Me.”

While it has done wonders for her brand, by her own description, she appears consumed with keeping her trim figure.

Khloe is a millionaire who wakes up before dawn every day, not for work, but to start her day with vigorous exercise.

She herself has described planning her entire day around making time for multiple tiny meals and, of course, more exercise.

If that is what she wants to do with her time and her life, that is her choice to make.

Jameela’s real issue is that she is peddling a product to fans as if it is how she stays thin.

No one really expects Khloe to back away in shame because of Jameela’s criticisms.

Generally speaking, most of the Kardashians tune out criticism, dismissing it all under the umbrella of “haters.”

Also, let’s be real — every time that Khloe posts a photo ad like that, she makes enough money to buy a house.

Plenty of people would sell (deadly) fentanyl lollipops to literal children for that kind of cash if they could get away with it.

What Jameela hopes to accomplish is raising awareness that most weight loss products are diarrhea-inducing scams.

There’s a real secret to weight loss and it’s a combination of two ingredients: money and genetics.

29 Stars Who Shamed Their Body-Shamers

Which Royal Will Be the First to Know When Prince Harry and Meghan Markle’s Baby Is Born?