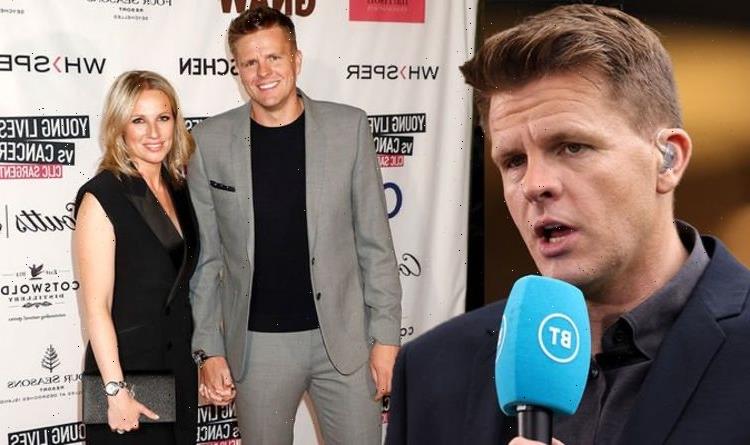 Jake Humphrey, 43, is best known for being the main presenter of the BT Sports football coverage, having previously worked with the BBC and Formula One. Speaking to Express.co.uk Jake revealed the backlash he received after getting the presenting role on Formula One and his wife’s tearful call after seeing comments online.

You’ve got a minute to impress them.

Jake hosts one of the most popular podcasts at the moment, High Performance, and he became a Sunday Times bestselling author this year for his book, High Performance: Lessons from the Best on Becoming Your Best.

The BT Sports presenter mentions in his book how he got his big break with the BBC.

Speaking to Express.co.uk about when he found out about the job, he said: “I waited for this big day when I knew the announcement was going to be made and it was Thursday and they were going to announce it at 10 o’clock.

“I said, ‘What’s the matter? She said I’ve just been on the internet and everyone thinks you are going to be s**t, those were her exact words.”

He continued: “So I said ‘where did you read that?’ and she said on the BBC website.

“She had gone onto a message board, the BBC used to have like a 606 message forum board and Formula One fans were just saying ‘Who is this guy from kids TV?

“Why has he been given the job to present Formula One? He doesn’t know anything about Formula One, he is going to ruin the sport’.”

This made Jake realise that he had to make sure his debut on Formula One was to the best of his ability as it would have been a make or break.

He continued: “So, when I started Formula One I was standing in the pit lane in Australia, which is a very exposed job.

“You are standing in a pit lane, with an ear piece you know you are about to go live on air to millions of people back home watching on BBC One.

“You’ve got a minute to impress them and for them to make up their minds on you.”

Jake couldn’t believe his luck and how “remarkable” it was to get what he wanted after working so hard.

He added: “I was on kids TV and I was suddenly offered the job presenting Formula One on the BBC, which the BBC had paid tens of thousands, millions of pounds for the rights to.”

Jake used to work on children’s TV with the likes of Holly Willoughby, Fearne Cotton and Reggie Yates.

Express.co.uk asked Jake if he still kept in contact with anyone he used to work with.

He replied: “Yes, it’s a really good group of people actually that we all came through on children’s telly together and I love it when I see Fearne Cotton, Holly Willoughby and Reggie Yates.

“We sort of learned the trade together really.

“The great thing about children’s BBC was it was a place to make your mistakes and to learn and to grow.”

Jake is currently promoting his book inspired by his podcast High Performance.

Speaking about the book, he said: “Realising that we are all responsible for our own lives is really really powerful and that was the reason for writing the book, because I just want people to pick it up, read it and start 2022 with a slightly altered mindset that they can be as successful as they like.”

High Performance: Lessons from the Best on Becoming Your Best by Jake Humphrey and Damian Hughes is published by Random House Business on 9 December.

What cosmetic surgery has Katie Price had?
World News