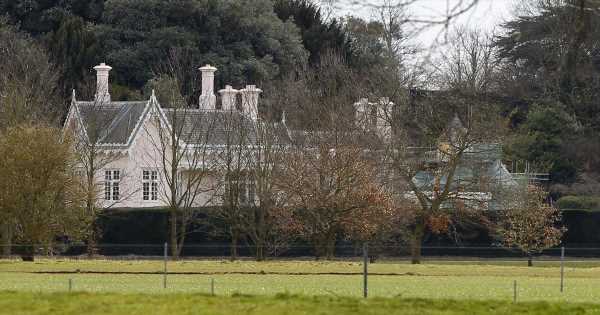 If walls could talk, then Adelaide Cottage, rumoured future Windsor home of Kate, Will and their children, could have a tale to tell that is both shocking and heart breaking.

As the one time home of handsome pilot Group Captain Peter Townsend, the cosy country retreat close to Windsor Castle is thought to be the place where the former equerry to the Royal family and The Queen’s younger sister, Princess Margaret, first fell in love.

Their passionate romance led to one of the biggest scandals of the post-war 20th century, exactly 70 years ago, when the secret of the pair’s long-running affair became public in 1952 and they were refused permission to marry because Townsend was by then a divorced man.

The key part played by Adelaide Cottage in the ill-fated relationship dates back to the time when Townsend moved there with his wife, Rosemary, and their young son Giles. Peter was working as an officer on the staff of King George VI who was then resident at Windsor Castle with the Queen and their two daughters. The officer was granted the reportedly modest house as a grace and favour home nearby.

At that time it was described as an old-fashioned, “poky and unattractive” residence, hidden behind a 10ft tall privet hedge, with limited electricity supply, but the Townsends made do. The two families were evidently close, with the King becoming godfather to the couple’s second son Hugo, born at Winsdor in 1945, and all the Royals attending the christening tea at Adelaide Cottage.

After that it seems the teenage Princess Margaret and her older sister, then Princess Elizabeth, were frequent visitors to the Townsend family at home, especially on Sundays. If Peter failed to notice Margaret at that point, the dashing officer certainly caught her eye as she later admitted, saying she had a “terrific crush on him”.

The cottage could perhaps reveal the exact moment their feelings became mutual, although some sources say their friendship began to develop into romance as early as 1947, when the princess was just 17 and Townsend’s boys were still very small.

As his marriage to Rosemary began to falter, courtiers noticed Townsend and Margaret spending more time in each other’s company, riding together around the Windsor estate, according to Sarah Bradford’s 2002 biography of the Queen.

Their story had a sad and sorry ending. After Townsend divorced Rosemary in 1952 and left Adelaide Cottage for good, his relationship with the then 22-year-old Margaret emerged from the shadows and the couple were desperate to get married.

But bureaucracy put paid to that dream under a Royal Marriages law that discouraged members of the Royal Family from marrying a divorcee while their ex-partner was still alive. Margaret and Townsend continued their relationship but did their best to keep out of the spotlight.

The Queen then found herself caught in the middle of the scandal, as she had to consent to her sister’s marriage to a divorced man while Margaret was under the age of 25. She asked Margaret to wait another three years, during which time Townsend was sent to the British Embassy in Brussels.

Two years later and with a romantic ending at last in sight, the government insisted Margaret be stripped of her royal privileges, as well as her income, if she were to marry Peter. The heartbroken princess made the tough decision to give up the love of her life and put her Royal duties first, three years later marrying photographer Antony Armstrong Jones, with whom she had two children.

Meanwhile, Adelaide Cottage has had a succession of dignitaries and courtiers as residents, most recently Simon Rhodes, son of the Queen’s late cousin Margaret, who died in 2016.

In 2019 it was mooted as a potential new home for Prince Harry and his wife, Meghan Markle, who were pictured visiting the property, although the move never happened. Now it has been been confirmed as the place for the Duke and Duchess of Cambridge to settle with their three children.

According to reports, the family will move into the cottage this summer so they could "be closer to The Queen".

–For all the latest Royal stories, sign up for OK!'s daily newsletter here.

The Lazarus Project episode 1 cast: Who is in the cast of the Sky series?