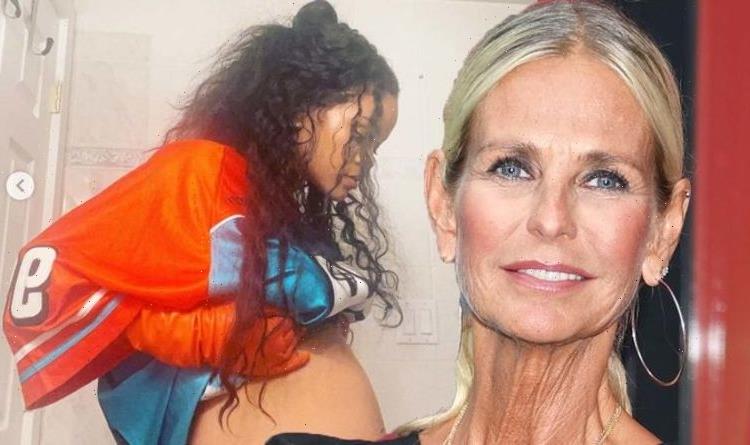 Ulrika Jonsson, 54, took aim at Rihanna, 33, after the singer debuted her baby bump in new photographs earlier this week. The Swedish-British television presenter seemed less than impressed with Rihanna’s outfit of choice for the photoshoot.

The Bajan singer showed off her baby bump for the first time in a series of photos alongside her partner, rapper A$AP Rocky.

In the pictures, Rihanna could be seen wearing a bump-baring hot pink Chanel coat and some distressed jeans.

The Umbrella singer complemented the look with gold jewellery and a gold hardware belt framing her hips.

Despite the freezing temperatures of a snowy New York City, Rihanna could be seen effortlessly strolling hand-in-hand with her partner.

However, in a new column for The Sun Online, mum-of-four Ulrika argued she could not “imagine anything worse” than exposing her baby bump to very chilly conditions for a photo shoot.

She penned: “The way Rihanna announced she is expecting her first child is enough to make you believe she is the first woman to ever experience pregnancy.

“Looking chic and glam in a snowstorm in Harlem, New York, she was wearing nowt much but a hot pink Chanel coat showing off her bare baby bump, which was draped in a Lacroix necklace and cradled by her hands.

“But these are the times in which we live. Next, no doubt, will be an elaborate gender-reveal party, with no expense spared.

“I can’t imagine anything worse than freezing my bump off for the sake of a photo op.”

The model concluded: “But obviously I wish her all the best.”

Earlier this week, Rihanna shared the first photos of her baby bump on social media, sparking a fan frenzy.

The post featured some pictures from her pregnancy reveal series, as well as a candid photo taken in a bathroom, showing the singer gazing down at her bump.

DON’T MISS
‘How much are you paying him?’ Prince Harry called out by Piers Morgan [LATEST]
Ugo Monye in tears over discovery about Strictly’s Rose Ayling-Ellis [INSIGHT]
‘Always get emotional’ Anton Du Beke on wife’s struggles [UPDATE]

In view of her 120 million followers, she announced: “How the gang pulled up to black history month.”

Fans and friends of the music star were quick to react to the images, with many sharing their thoughts in the post’s comments section.

Nelsonbeato added: “I can’t stop smiling! So happy for you!”

“No doubt you both will be amazing parents.”