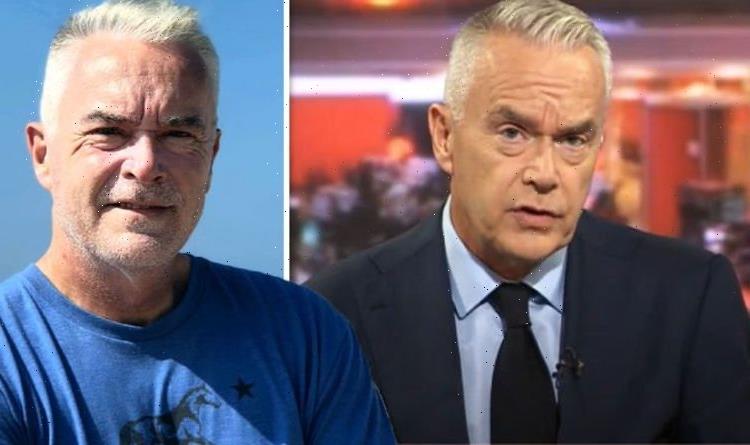 BBC News at Ten presenter Huw Edwards has celebrated turning 60 with a cheeky announcement on social media. Taking to Twitter, the Welsh broadcaster, who has fronted the programme for the best part of two decades, addressed his retirement plans amid recent rumours surrounding his exit from the broadcaster.

Delighted to confirm my retirement plans for…2041

In view of his 132,100 followers, Huw revealed that he was celebrating a milestone birthday.

“Thanks for all the birthday wishes.”

The newsreader added the hashtags: “#diolch #penblwydd #birthdayboy”, alongside the Welsh flag while tagging BBC News.

Huw posted a picture of himself at the beach, revealing his youthful looks as he celebrated the big 6-0.

Fans of the BBC presenter flocked to the post to wish the star happy birthday – with many expressing their wishes in Huw’s native Welsh.

One wrote: “Happy Birthday – I read your tweet in my best Welch accent as I don’t know how to say Happy Birthday in Welch!” (sic)

Another joked it was time for Huw to step aside after 20 years of fronting the programme.

They commented: “Rocking the I’ve done my time, let someone younger have a go. Happy birthday mate.”

Days ago the Welshman candidly opened up to broadcaster Dewi Llwyd during a special interview on BBC’s Radio Cymru.

Speaking about his BBC News at Ten future, he said: “I believe a time comes when you’re bound to re-assess what’s in front of you.

“Now a big milestone [his 60th birthday] is here, it’s natural to think, ‘Am I going to continue in this job for another five years, or do I want to do something different?’”

Delving into the impact the role has taken on Huw after all these years, he revealed to Dewi: “The nightly news business, after 20 years, that can be taxing.”

“Even though I still enjoy the job,” he added. “But I don’t think I’ll be doing that for long.

“In the first place, I think it’s fair for the viewers to get a change.

“Secondly, I have co-workers who are very talented. It’s time to give them a chance too. And I think it’s an appropriate time to consider what’s ahead,” he added.

While the revelation may leave fans fearing Huw will vanish from news reports going forward, he reassured them it won’t be a sudden exit.

“But, of course, I’m thinking about the working patterns of the future.

“And the truth is I don’t want to sustain these working patterns for a long time to come because I don’t believe it’s a very wise thing at all.”