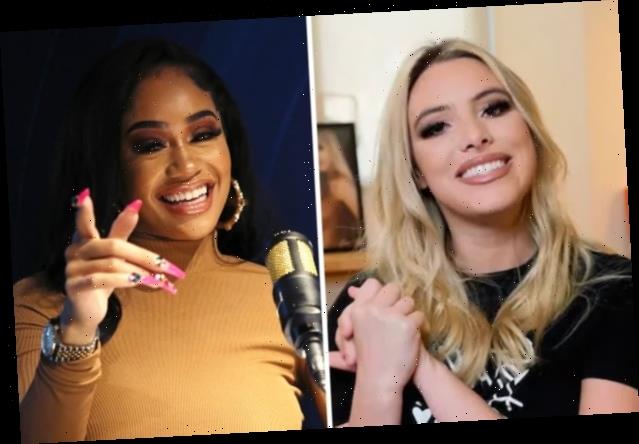 Power Women Summit 2020: Fans don’t want a “mysterious celebrity” in 2020, Saweetie says — they want to feel like they know their favorite artists

YouTube isn’t just a place to watch or make money off of videos — it’s also a great platform for building audiences and connecting with people all around the world who may be going through tough experiences you’re also dealing with, according to creators Lele Pons and Saweetie.

They shared their insights during TheWrap’s Women of YouTube: Driving Diverse Content on the World’s Largest Video Platform panel presented by YouTube, part of the Power Women Summit.

Pons and Saweetie talked about why the platform has been so vital to them. Strictly from a professional standpoint, they’ve both enjoyed major success on YouTube, with Pons racking up 17.4 million subscribers on the platform over the last five years, thanks in large part to her comedy sketches. Saweetie, meanwhile, has pulled in more than 500 million views for her songs and videos, including 111 million views for her breakout track “Icy Girl,” which was released in 2017.

But the COVID-19 pandemic has also given the two young artists an opportunity to be more vulnerable and open with their fans, both said. Pons said her recent YouTube original docuseries, “The Secret Life of Lele Pons,” gave her an opportunity to discuss her own struggles with Obsessive-Compulsive Disorder and Tourette’s Syndrome. The series was liberating, Pons told TheWrap’s Beatrice Verhoeven, and helped her connect with fans who were trying to navigate OCD and Tourettes, too.

“To be honest, I did not want to show that to the world,” Pons said. “But it go to a point that, everybody felt very alone [during lockdowns]. And I was just like, listen, the goal is to not make people say, “Oh, Poor Lele” or something like that. I realized the goal is if I can, let’s say, help one person… that’s so important.”

The reaction from fans and friends, Pons said, drove home how important the project was — and why it’s so important to make content that’s authentic.

“You have to do something that actually touches your heart,” Pons said. “You can’t just promote something because you’re being paid. I wanted to do this not for the money, but because it’s something I know and I know I’ve gone through it, I have experience with it, and I can share with my fans. People know if you’re doing it for real or just doing it for promotion. This is for real. And I’m so happy I was able to do it, because so many of my friends who I didn’t know had the same things I had, came to me and said I loved this documentary because I have this too and I feel so alone. People related to me.”

Saweetie said she went through a similar experience during the pandemic when she decided to start a video diary series on her channel. The video diary, dubbed “The Icy Life,” has allowed her to peel back the curtain and give fans a better feel for who she is. That added authenticity, she said, fosters a better artist-fan connection.

“My YouTube [following] and my fanbase really started to grow during quarantine, when I started my own diary,” Saweetie said. “Music is evolving into when people are listening, they don’t want a mysterious celebrity. They want to feel like you’re their friend, their sister, or they want to feel like they know you. Social media does give me anxiety sometimes, so I’m not that girl who can go live and just post all day because it makes me feel like I’m exposing too much of myself. But YouTube gives me the opportunity to control the narrative. So I’m able to film, cut it up, and put it on YouTube…. after my fans began to know me, they started to love me even more. YouTube has provided such a great opportunity for me to connect with my fans and for them to feel like they know me.”

That intimate bond remains a key to YouTube’s success, despite its size. Susanne Daniels, YouTube’s head of global content, said the platform’s “immense reach” — with 2 billion monthly viewers — has driven artists like Paul McCartney to reach out to them to break new records, knowing YouTube offers a great spot for fans to discover and discuss new content.

Of course, the better the connection YouTubers can make with fans, the more money they can pull in. But YouTubers don’t need to have the massive followings of Saweetie and Pons to build a viable business, it turns out. As Kelly Merryman, VP of content partnerships pointed out:

“The growth and number of creators who are actually making 5-figures on the platform is up 40% year over year, which is kind of amazing with this size platform,” Kelly Merryman, VP of content and partnerships, said. “They are the next generation of media brands. Not only are they controlling the cultural dialogue, they’re also doing that in a way that’s providing opportunity for folks that work for them now, too. They’re creating their own companies. So, the lines are blurring, not only between creators and artists, as you’re seeing here today, but also between creators, artists and media companies.”