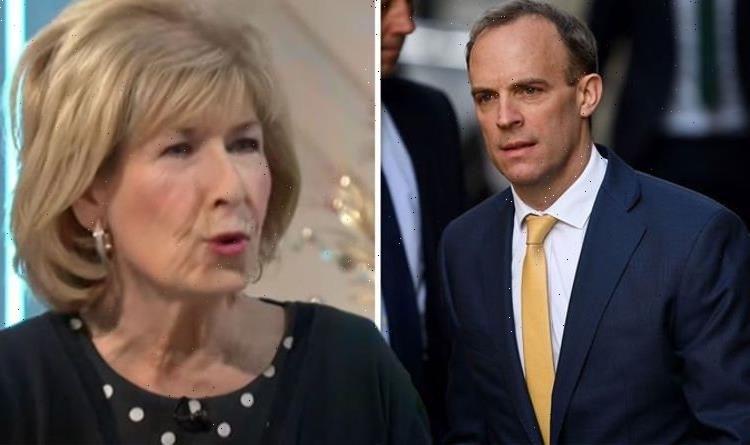 Journalist Jennie Bond, 70, has hit out at Dominic Raab, 47, who is said to have returned to Britain from abroad last night amid the Afghanistan crisis. Jennie took to Twitter to take a swipe at the Foreign Secretary after claims he was on holiday before the Taliban advanced into the capital of Kabul on Sunday morning.

The star penned in view of her 9,300 followers this morning: “I do hope #DominicRaab is enjoying his holiday. #Afghanistan.”

Jennie’s criticism of Raab comes after Tory and Foreign Affairs Committee chairman Tom Tughendat also hit out at the MP.

He claimed: “We haven’t heard from the Foreign Secretary in about a week – despite this being the biggest single policy disaster since Suez.”

Jennie’s feelings were echoed by former Secretary General of NATO, Lord Robertson of Port Ellen, who slammed Raab for staying on holiday while the problems in Afghanistan worsened.

He said: “It is stunning that the Foreign Secretary would stay on holiday as our mission in Afghanistan disintegrated. The horrors unfolding with every minute demand focused attention from the top.

“The urgency involves both the evacuation of British citizens but also what is now to happen to the people of Afghanistan.

“The fact that the Foreign Secretary is missing in action shows graphically the lack of purpose in our government’s attitude to what we set out to do twenty years ago.

“As Secretary General of NATO on 9/11 and the person who announced the invoking of Article 5, the self-defence cause in the North Atlantic Treaty, I am sickened by the prospect of the twentieth anniversary being marked by the Taliban back in control of Afghanistan.”

Raab spoke out on the situation for the first time on Sunday.

He wrote on Twitter: “It is critical that the international community is united in telling the Taliban that the violence must end and human rights must be protected.”

Prime Minister Boris Johnson recently chaired his second COBRA meeting amid the crisis and Parliament will be recalled on Wednesday.

Furious backlash has been aimed at the government in recent days, as Conservatives have accused the UK of abandoning 20 years of progress.

It comes after the US and allies withdrew a two-decade military presence in Afghanistan.

Taliban insurgents have now managed to regain the ground they lost in the 2001 invasion following the 9/11 attacks.

Outrage has been aimed at both the US and the UK, with many questioning why the nations didn’t do a better job in protecting Afghanistan.

Yesterday, the Foreign, Commonwealth and Development Office confirmed that Mr Raab “is returning to the UK today, given the situation”.

An FCDO spokesperson also said: “The Foreign Secretary is personally overseeing the FCDO response, and engaging with international partners.”

Many celebrities have joined Jennie in speaking out on the devastating situation, with Strictly Come Dancing judge Motsi Mabuse writing: “The more I read the more upset I get . Honestly just everyone blaming each other.

Gary Lineker also praised Canada for welcoming a flight of refugees to the country, who are part of the 20,000 vulnerable Afghans threatened by the Taliban.

“Not every country is bereft of decency,” the Match Of The Day host wrote in view of his 8.1 million Twitter followers.