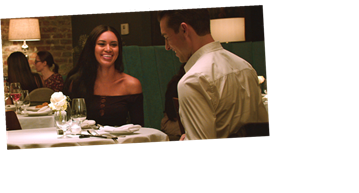 Last year, Netflix released a new kind of dating show, in the time before shows like Love is Blind and Too Hot To Handle really took off in the grim era of 2020. Dating Around, in six half-hour segments, followed one person each episode as they went on five dates, where they can only choose one of the “contestants” to go on a second date. Unlike other dating shows, this one had no talking heads while also making sure to provide people of various races and sexual orientations, making it relatable to more than the straight audience that shows of this nature seem to typically appeal to.

Before the second season drops on Friday, you might be wondering what happened to those featured on the first season, which took place in New York. Are they still together or did they go their separate ways for the best? Here’s a look at what happened to the couples before you dive into a whole new set of stories.

Luke had some pretty amazing first dates with his five choices (even making out with a few of them), but in the end he chose Victoria to be the object of his second date affections.

Unfortunately, the twosome didn’t stay together, with Luke confirming his single status on the podcast Reality Life With Kate Casey. But the two still seem to be friendly, as they both still follow the other on Instagram with the occasional comments here and there. While Luke is still looking for his ladylove, it looks like Victoria found her happy ending, getting engaged in May 2019.

What a Year… it’s been a wild ride and one of the best years of my life. A lot of highs and regardless of what you see here on IG, a lot of lows too. Being overwhelmed by a small slice of tv fame and going from “Hey you’re Luke from Dating Around” to “hey… you look kinda familiar” and then back to normal life – relevance, who you are to other people, and how people see you really screws with the view you have of yourself and can really beat you up. But I believe some of the best growth happens from a place a brokenness. When who you are gets shaken. And when you take away the fluff and silence the noise you discover more of your true self and have clarity on what truly matters. Being reminded that LIFE IS A JOURNEY AND IF IT WAS EASY IT WOULDN’T BE ANY FUN. This roller coaster of a year has forced me to make changes, take risks and pursue my passions – rediscovering my values and refining my vision for the future. I haven’t talked much on ig about my Christian faith but it’s something that means a lot to me and will forever be my guiding compass. It inspires me to be strong & confident, to know I have a purpose, and most of all reminds me that it’s all about people – to have an unrelenting love for ALL people regardless of differences. So thankful for everyone who’s been on the journey with me this year. Thank you @netflix and the @dating.around Family! Wishing you all a happy Valentines Day ❤️

It’s been a long road, but I always knew you’d be the one walking it with me. I love you, Carl. #isaidyes #engaged photos by @facibenifotografia

In the ultimate move of female empowerment, she decided that none of her five suitors were worthy for her to want a second date. It didn’t help that the argument between her and one of her dates seemed pretty jarring and traumatic.

Although still single, she does seem to have a good relationship with four of her five suitors… and in an interesting twist, she seems to be super close with co-star Luke!

Trying to use this strange time as an opportunity to live 100% in the moment.

Going though my camera and finding old gems. @lukehawksworth & I became good friends after filming Dating Around for @netflix & both somehow ended up in LA. This is Luke in his natural state. Perfect smile, a little scruff & always trying to look at the positive & stay motivated! I can’t believe it’s already been 2 years since we filmed. Looking forward to seeing the new cast & season coming out June 12! #cultureclash.

As the first gay person featured on the series, Lex chose Cory at the end of the episode to go out on a second date.

It doesn’t seem like the relationship lasted for too long, as it looks like both men moved onto serious relationships elsewhere. Cory seems to have moved in with his boyfriend, while Lex recently celebrated an anniversary with his own boyfriend.

We decided to move in together and the universe was all, oh you’d like to get to know each other better? Hold my beer. Happy to report we are safely quarantining and social distancing and still love each other. Hope you and yours are safe and healthy. Let’s make a FaceTime date!

#happyanniversary to this #maniac Surprise! I got ‘being isolated with me’ for you as a gift. #ArentYouLucky #yourewelcome #terriblegift

In one of the more heartwarming episodes (all the daters are over 50!) Leonard chose to be with Dianna over the other ladies to take out on a second date.

As for what happened to the couple… no one actually knows their relationship status, as neither has a public social media account. The only update found is actually from over a year ago, when someone asked the show’s official Twitter account what happened with the two. The answer? The account replied and said it was possible that they could still be together!

Hi thank you for your inquiry! Leonard may still be with Dianna!

For a woman who wasn’t afraid to end a date when feeling uncomfortable, out of the four other suitors, she chose to go with Matt, aka the man after her heart via a can of Narragansett.

Although it looks like Sarah is currently single, no one really knows what the story is with them. Since Matt has a private Instagram account, there’s no access to his side of things, and judging Sarah’s activity, it looks like she’s just trying to survive a global pandemic like everyone else.

Today I’m 27. I have officially embarked on my late twenties during a global pandemic. I guess it can only go up from here?

After Mila enjoyed five fun and interesting dates, she ended up choosing Charlotte for the second date, which was pretty obvious, especially after their romantic kiss in the rain.

As of today, it looks like the two are no longer together. But they are both dating other people, so at least they’re happy! Although Mila’s Instagram can’t prove that she doesn’t have a special lady in her life, Charlotte is happily engaged.

Behind the scenes with @milakoren during the taping of Episode 6 of @netflix new show #DatingAround – we had a great time on our hot date and I have so appreciated the support and love. What a fun experience ! ⭐️⭐️⭐️