In case you were wondering, the massive celebration that is the Queen’s Platinum Jubilee is still going very strong across the pond. Today, the agenda included the Platinum Party at the Palace, which is basically an insane music festival with a once-in-a-lifetime lineup being held in the Queen’s honor.

How once-in-a-lifetime? Well, Queen and Adam Lambert opened the show, which was headlined/closed by Diana Ross, with performances by the likes of Rod Stewart, Alicia Keys, Hans Zimmer, Duran Duran, Craig David, and Andrea Bocelli in between.

The Queen, sadly, was not able to attend the concert herself, but most of the senior members of the royal family turned out, including Prince William, Kate Middleton, and their two oldest kids, Prince George and Princess Charlotte.

While Will, Kate, and George looked appropriately thrilled to be attending the event, Charlotte appeared much more “meh” about the whole thing: 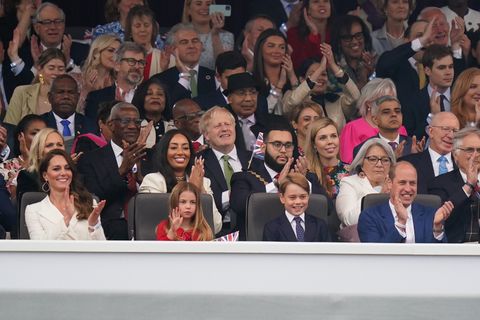 At one point, Kate leaned over to chat with her kids, and she and George seemed to be sharing a moment, while, once again, Charlotte was entirely and, TBH, hilariously unimpressed: 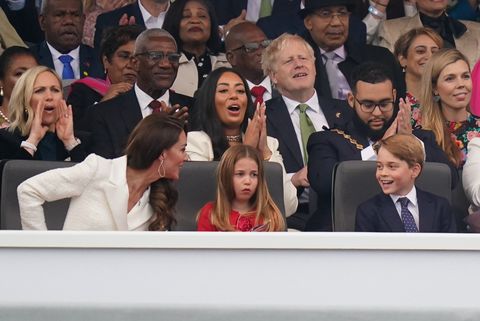 And, while we all love to play royal fashion watch, the pictures from this event have, so far, been limited to shots of the royal family watching from their seats, making a full view of Kate’s ensemble impossible. The portion of the outfit we can see (an enviable white jacket) is predictably perfect though:

The Cambridges were joined at the event by several other royals, including Princesses Beatrice and Eugenie, Princess Anne and the Wessexes, among others. Noticeably absent were Prince Harry and Meghan Markle, who reportedly skipped the high-profile event in favor of a quiet family night at home to celebrate daughter Lilibet’s first birthday (a spokesperson for the Sussexes said they’re celebrating the milestone “together privately as a family” while in Windsor).